Harviestoun makes a series of beers called Ola Dubh which are aged in Highland Park casks. And they are awesome. It turns out that the base beer they use for that barrel aging is a slightly higher gravity (i.e. higher alcohol) version of this beer: 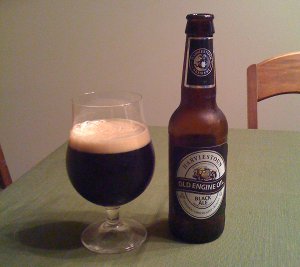 Harviestoun Old Engine Oil – Apparently the owner and founder of Harviestoun spent many of his formative years working for Ford Motors, and so when he saw this viscous black liquid, it made him think of, well, old engine oil (if ever there was a beer calling out to be packaged in the old-timey oil can style that I mentioned a while back, this is it…). Pours a very dark amber/brown color, almost but not quite black, with a finger of tan head. The nose is very strangely spicy. Typical roasty aromas are also present, along with some nice caramel and fruity notes but there’s something else there that’s unique. I’m calling it spicy smell, but that’s not right – I can’t quite place it. Taste is full of rich chocolaty flavors with a just a bit of roastiness. Whatever that thing from the nose is, it’s here in the taste as well, though less pronounced. Full bodied, rich, and creamy. I really like drinking this beer. B+

I’m not the biggest fan of porters, but this is one that I can deal with. Not to mention the Ola Dubh stuff, which I’m definitely planning to explore more of…