For the uninitiated (i.e. those of you who aren’t British), the goal of a “session beer” is to allow you to consume multiple beers in one reasonably long session without overwhelming your senses or getting you completely sloshed. As such, these beers typically feature very low alcohol content, clean, balanced flavors, and an overall high drinkability. For some reason, the specifics of session beers are absurdly divisive in the beer nerd community. For example, just trying to pin down the ABV threshold after which a beer is no longer sessionable can be a laborious exercise. For the most part, though, people seem to agree that the beer should be no higher than 4-5% ABV. You’ll see lots of arguments (usually from Americans) that a 5.5% or even 6% beer qualifies, usually accompanied by harsh denouncements (usually from Englishmen who claim that anything over 4% is an affront to the beer gods).

There really isn’t a single, definitive answer, and quite frankly, it seems like the history behind the phrase isn’t even that well established (though the concept of a “session” has certainly been around for a while, the term itself seems to be a relatively recent development). Whatever the definition, these low-ABV, highly-quaffable beers are certainly a worthwhile pursuit. In case you can’t tell, this whole concept grew out of British pub culture, and as such, sessionable beer is most common there. But there are certain circles in America that are also doing their best to promote session beers in the craft beer arena.

Stone Brewing has a reputation, though. They’re rebels, angry and aggressive. Their most famous beer is called Arrogant Bastard and printed on the bottle is the phrase “You’re Not Worthy!” It’s also 7.2% ABV, which I don’t think anyone would argue is sessionable. According to BeerAdvocate, Stone currently has 68 different beers available. The average ABV for those beers is over 8%. I could go on, but one of the interesting things about Stone is that they do put out some more “normal” beers. They have an interesting and distinctive pale ale, and their regular IPA is phenomenal. Then there’s this beer: 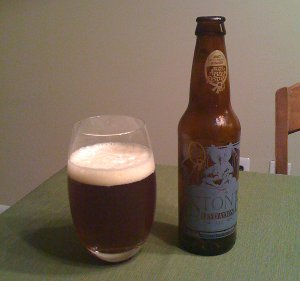 Stone Levitation Ale – Pours a dark amber color with a finger of tight head. Smells absolutely delicious – very hoppy, some citrus, and sugary sweet aromas. The taste is perhaps less sweet than the nose implies, but it’s really quite good. A nice, complex malt backbone with a prominent but not overpowering hop bitterness throughout. It’s got a relatively light body body; very easy to drink. I had this after a particularly long day, and so I think I was ideally primed to like this sort of thing, but boy did it go down easy. I really enjoy this beer and it’s definitely something I could drink all night… A-

At this point, I don’t actually have any Stone beers on my plate, but there are definitely some that I need to get around to (in particular, the decidedly non-sessionable Old Guardian Barleywine has been calling my name).