It occurs to me that I’ve been slacking on the filmic side of Double Feature posts of late. This is partly because my recent Netflixery has included an inordinate amount of television – catching up with the likes of HBO’s Deadwood and the Doctor Who Revival (slow going to start, but I am assured of future greatness), but I’ve also slowed down my movie intake recently. This is all about to change, though, as we’re heading into my favorite time of the year, Halloween, which I celebrate with a 6 week marathon of horror movies. As it turns out, I will also be attending Fantastic Fest later in September. For the uninitiated, it’s a mostly genre film festival, but one of the prime locations is at the Alamo Drafthouse – a movie theater with craft beer on tap. What a novel idea (we need one up here). Not that the beer blog will be filled with movie reviews – it’s never been like that and I’ll save my verbose reviews for my general purpose blog – but I do so enjoy the notion of combining two beers and two movies in a double feature.

Anyway, a fellow beer club member recently took a trip to Ohio, and came back with a bunch of exotic (i.e. mostly not available in PA) beer. Some of it she didn’t like, which means free beer for me. I’ve never heard of Butternuts before, but just from their branding, I have a feeling I’m in for something a little weird. Maybe white trashy. So I threw a couple of Hollywood thrillers from earlier this year on the screen and cracked a few cans of this stuff open. First up was Source Code. I actually saw the first half of this movie in the theater, but there was a power outage, so I never saw the ending. The theater was very kind and gave us all a free ticket, but perhaps tellingly, I did not use that free ticket to see Source Code again. Instead, I waited for Blu-Ray. It’s not a movie I’m particularly in love with, but it’s entertaining and engaging stuff, and there’s some more disturbing substance that emerges the more you think about it (especially the ending). I ended up enjoying it quite a bit. Second was Limitless, an enjoyable enough thriller about a drug that makes you, like, super smart. Of course, it suffers from the same problem that most stories featuring geniuses does – namely, the genius does some really dumb things. Still, it’s not especially egregious in that respect, and it’s a fun little film. On the beer side, I had the two aforementioned Butternuts beers: 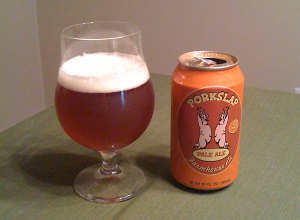 Butternuts Porkslap – I have to admit, I love the audacity of naming a beer Porkslap and then putting two belliy-flopping pigs on the can. It’s all very evocative. Anyway, it pours a deep, slightly cloudy amber color with a finger or two of off white head. The smell is strange for a pale ale. Just a hint of citrusy hops, but more of a sugary, almost Belgian mustiness in the nose… It’s quite quenching at first. Downright quaffable. None of that Belgian character from the aroma, but you do get a nice, subtle bitterness in the taste. There’s also some hop resin or maybe caramel character floating around in here too. It’s not really typical of the pale ale style, but it’s a nice changeup that features similar traits. All that being said, it is also pretty straightforward and loses some of its punch once you reach the bottom of the glass. Fortunately, that didn’t take long. It won’t knock your socks off, but it’s eminently drinkable, and at 4.3%, it won’t kill you either. If this were readily available in my area, I’d probably grab a six pack for a barbecue or something. B 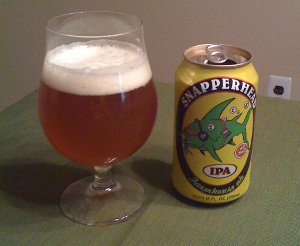 Butternuts Snapperhead IPA – Not quite as ambitious here, it pours a slightly lighter color, more like orange, with some haziness and a finger of off white head. Again with the Belgian yeast aromas, perhaps a little more pronounced this time, along with some sugary sweetness, maybe some toffee aromas, and the hoppy citrus typical of the style. Taste is nice and sweet with a balancing, but not overpowering hoppy bitterness. That’s actually somewhat rare for an American style IPA, and it’s actually a nice change of pace. Definitely a heavier beer than the Porkslap (which is to be expected), but it’s still maybe a medium bodied beer. Not quite the perfect barbecue beer like Porkslap, but still quite drinkable. B-

I would say that neither the movies nor the beers were particularly remarkable, but they all worked well enough to have a good time. I have to admit that I could really do with making Porkslap a regular thing and might even upgrade the rating over time…