This bottle sez: “Double India Pale Ale. A style of beer curiously born on the foggy shores of Father Junipero Serra’s first founding mission.” I can’t really find any historical evidence about DIPAs being born in old Spanish Missions, but it’s easy to see why a brewery that calls itself “Mission” would use Serra as their inspiration. As near as I can tell, Serra was never actually shipwrecked either, but on the other hand, it was the 18th century. I’m sure anyone traveling on the high seas back then got into some pretty hairy situations. 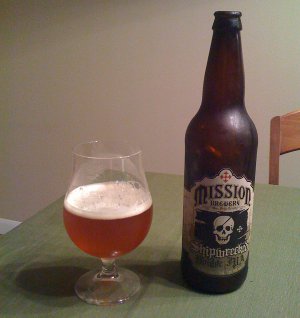 Mission Shipwrecked Double IPA – Pours a nice amber color with a finger of head and some lacing as I drink. The smell is a nice combo of citrusy hops and caramel. Taste is very sweet with just enough bitterness to balance it out, but otherwise not much going on here, and given that it’s a double IPA, I was expecting a bit more bitterness here. As it warms, the alcohol becomes more prominent, though never overpowering or anything. It’s got a medium body and a relatively smooth and slick mouthfeel. Overall a decent entry in the overcrowded DIPA field, but it’s got some balance issues. B

This beer is perhaps more interesting than a “B” implies, which is similar to my reaction to Mission’s Blonde (which I gave a B-). So Mission is indeed an interesting brewery that shows a lot of promise… I’ll be keeping an eye out for more of their brews.