A couple years ago, brewery Uinta started a new line of high-alcohol beers under the “Crooked Line” banner. The marketing fluff on their website includes stuff like “our crooked path has taken us to some unexpected places” and “brew outside the lines”. All of this sounds suspiciously like Dogfish Head’s slogan: “Off centered ales for off centered people” (which I guess is not necessarily a bad thing), but when I saw a couple of these bottles in the bottle store, I was quite taken in by the artwork and also the prospect of a bourbon barrel aged barleywine (both of which are things I enjoy greatly). Judging beer by the label is sometimes the order of the day (it’s not quite Belgian beer roulette, but perhaps a distant cousin), so I picked up a bottle of this. I’m glad to report that it was well worth the stretch.

I don’t know who Cooper is or why he’s cockeyed, but I presume it’s because this is an 11.1% ABV beer. I also assume Mr. Cooper is the bearded fellow on the label that’s using a bourbon barrel as a flotation device: 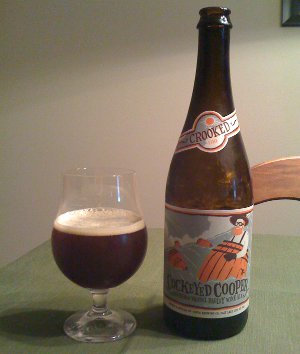 Uinta Cockeyed Cooper – Pours a dark brown color with a minimal head. Smells very rich and boozy, with some of those bourbon-soaked oak flavors and a nicely matched hoppy character. There’s a sugary aroma in the nose as well. Taste starts sweet, but then you’re hit with the oak (bourbon and a little vanilla apparent), followed by some hoppy bitterness and booze. It’s not overly bitter, like an IPA, but it’s there, and it helps dry out the finish. The flavors linger a bit in an aftertaste. I think the oak aging really imparted a nice richness to the flavors here. Full bodied but relatively smooth, you still want to drink this slowly. Overall, it’s pretty damn good. A-

When I bought this, there was another of the Crooked Line beers at the store – an American Black Ale called Labyrinth that I now very much want to try.