When I put my most recent homebrew, a saison style beer, in the fermenter, I started seeing bubbles in the airlock after only a few hours – a much quicker start than any of my previous brews. Indeed, this thing fermented vigorously for nearly 5 days. With all my previous attempts, bubbles didn’t appear in the airlock until at least 12-24 hours after pitching the yeast, and once they had started, there was only 2-3 days of vigorous activity, after which things trail off. Usually by the end of 2 weeks, things have slowed down considerably. And that happened for the saison too, but I was surprised at how long that initial phase of activity lasted. Now, I’m not entirely sure what this means, but I suspect that perhaps my pitching/fermentation temperature was a bit high, leading to a more active fermentation than is normally desired. 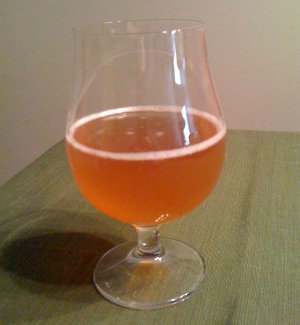 Or I could be completely wrong. The beer seemed to come out ok. It smells wonderful. It looks a little darker than usual for the style, but that’s kinda expected for extract brewing. I took a quick swig of it, and at first glance it seems to share a certain character with the Hefeweizen I brewed on my last attempt. Here’s to hoping that this goes a little better than my last attempt.

The final gravity was really low though. Somewhere around 1.005 (target was more around the 1.010 area), maybe even less. I guess we’ll see how that plays out. Doing the calculations, this means the beer should be somewhere around 7-7.5% ABV, which is certainly higher than I was shooting for, but not outside the realms of possibility.

I won’t bore you with the details of the bottling process, which basically went the same as usual – it’s a semi-tedious process, but the only really bad part is the sanitization of the bottles. Otherwise all went well and this stuff should be ready to drink in a few weeks. Wish me luck.

At this point, I’m looking to try something a little darker for my next batch. That’s apparently more suitable for extract brewing, and besides, my last 3 batches have been lighter style beers. Also, since I’ve been doing so much in the way of belgian styles, I figured I should try something different. Perhaps a chocolate stout or maybe an American Black Ale (or whatever you call those things).