When playing Belgian Beer Roulette, it’s advisable to pick a bottle that does not feature English text. That way, you have no idea what you’re getting into. In this case, I didn’t have much idea what I was getting into at all. “De Dochter van de Korenaar”? The doctor of the Korenaar? Was this brewed in honor of a fictional doctor from a fantasy novel? Perhaps a “noble” doctor (given the name of the beer)?

Yeah, of course not (my nerdiness knows no bounds). It turns out that the brewery name translates to “Daughter of the Ear of Corn” (presumably a reference to barley, though I’m not sure about the biological specifics here). Apparently they’ve only been open since 2007 (though I also get the impression that there was a brewery there in the past as well). 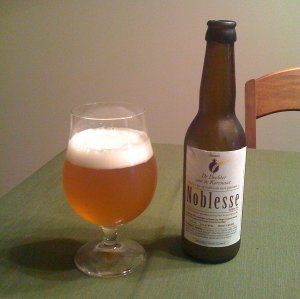 De Dochter van de Korenaar Noblesse – Pours a nice hazy golden color with a couple fingers of frothy head that leaves some lacing as I drink. Smells of musty Belgian yeast with some fruitiness and spiciness apparent. Taste has a nice spicy kick to go along with the crisp malt backbone. There’s a bit of an aftertaste here that’s not really working for me. Mouthfeel is a bit on the thin side, but it’s light and crisp and very easy to drink. A nice summer beer, I guess, but it’s not especially lighting the world on fire. B-

Not a huge success, but a worthy effort that won’t dissuade me from playing Belgian beer roulette any time soon…