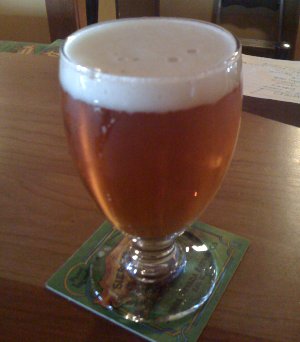 Russian River Pliny the Elder – Named after the famed “Roman naturalist, scholar, historian, traveler, officer, and writer”, Pliny the Elder was one of the folks responsible for initially classifying and documenting hops. The beer itself is somewhat legendary. It’s been at or near the top of Beer Advocate’s Top 100 Beers on Planet Earth list for a while now (last year it was at #1, right now it’s at #3). It’s also somewhat rare, which may be part of why it’s always ranked so high – a hard to find beer always tastes better once you find it! I’ve been keeping my eye out for some for a while now, and have had a couple of near misses before this, so when I actually got myself a glass tonight, I was quite pleased.

Pours a dark golden orange color, mostly clear, with a finger of perfect white head. Aroma is extremely hoppy and quite complex. Full of citrus and some pine, with a nice boozy, malty sweetness in the nose. I could hardly wait for the head to subside, so my first sip got some of that double IPA feel, but with a creamy head texture – a very good first impression. The taste starts off nice and sweet, with some citrus and pine, then you get hit with a wave of bitterness that intensifies as you approach the finish. Sometimes I feel like a lot of DIPAs overcompensate with massive amounts of malt, actually leading to less bitterness (despite the higher amount of hops/IBUs,etc…), but not Pliny. This isn’t to say that it’s overwhelmingly bitter or anything – it’s actually just perfectly balanced. Every component sings. Mouthfeel is also extremely smooth (I’d say “velvety” if I knew what velvet tasted like) and it goes down incredibly easy. I could drink these all night, which usually isn’t the case for beers this big.

I really suck at picking favorites and whatnot, so while I don’t really know if this beer deserves the title of “The Best Beer on Planet Earth”, it certainly deserves to be in that top 100 list and, more importantly, it wasn’t a letdown. All too often, I’ve tried a beer from the BA top 100 and wondered what all the fuss was about. Of course, this may have lowered my expectations somewhat for this beer, but I was still hoping for a lot. In any case, I can see why everyone loves this beer. If you ever get a chance, and if you like IPAs, you must try one. It’s a delicious and complex beer. A

Beer Nerd Details: 8% ABV on tap. Drank out of a, what would you call that, a goblet?

Now, of course, my focus shifts to finding me some of Pliny the Elder’s rarer sibling, Pliny the Younger. I expect that to be a much more difficult task – apparently only a handful of kegs make their way to the East Coast every year. I’m not complaining – most areas are not fortunate enough to get any of that beer, and Philly seems to always get at least some (even if you have to wait in line for hours just to get a few ounces).

* Ok, so I was actually told ahead of time that the bar had Pliny on tap, but still. I’ve been told this before and still missed out on some Pliny goodness (this stuff don’t last long). Thanks to friend and fellow beer lover Mike for the tipoff!