A while ago, in a post about Scottish Wee Heavy beer, friend and fellow beer nerd Padraic recommended another Scottish beer called Ola Dubh. The name translates literally as “Black Oil”, presumably a reference to the color and goopy consistency of the porter-like beer. This is a series of beers based on the recipe for brewer Harviestoun’s more traditional offering, Old Engine Oil, an English Porter. They take a higher gravity version of that beer, then age it in used Highland Park oak casks. This is apparently pretty notable, as most barrel-aged beers aren’t aged in traceable casks from a named distillery like this. Their website says it’s the first barrel-aged beer with “genuine provenance”. This is probably pure marketing fluff, but hell, I’m a sucker for that kind of thing.

As of right now, there appear to be 5 different varieties, based on the age of the scotch casks (not based on the age of the beer itself, which we originally thought). On a recent visit to beer Mecca State Line Liquors, I picked up a couple of bottles, and this past Monday, I cracked them open whilst taking in a double feature of How To Train Your Dragon and Scott Pilgrim Vs. The World. I’d seen both movies before, but they seemed better this time around. I have to wonder how rewatchability can and should color my reaction to movies. It’s a subject I’ve mused on before, but as I drink these beers, I’m now wondering how redrinkability should color my reaction to a beer. Most of the reviews on this blog are based on a single tasting, but a really full appreciation should probably require multiple tastings. As such, I’d really like to revisit the below brews. As hard as that’s likely to be on my wallet (these are not cheap beers), it would probably be worth it in this case. 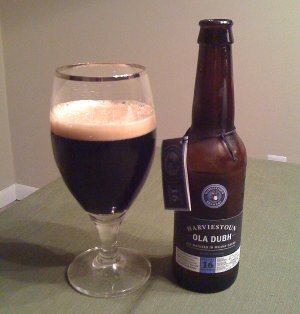 Harviestoun Ola Dubh Special Reserve 16 – Pours a semi-thick, opaque black color with a surprisingly light tan head. Smell is dominated by chocolate aromas and you can definitely feel the Scotch peeking through. Just a hint of roastiness in the nose. It smells really quite fantastic. The Scotch hits right away in the taste, quickly fading to highlight some chocolate flavors, but then reappearing a bit in the dry finish. Just a hint of bitterness appears in the finish too, lingering a bit on the palate. It’s got a full body with medium carbonation… it’s surprisingly smooth and easy to drink. As it warms, some additional flavors come out, maybe a little more on the roasty side. This a wonderfully complex beer. I’m really enjoying it. A- 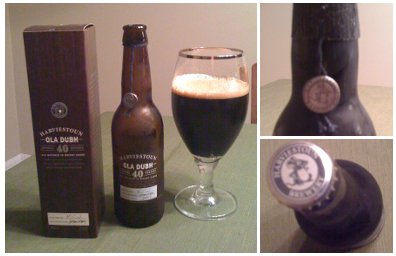 Harviestoun Ola Dubh Special Reserve 40 – Pours a little thicker, but with that same opaque black color. The head is a bit darker this time. Smell features a bit more of the Scotch this time around, maybe even a little peat smoke, but that chocolate aroma is still clearly there. Again, smells fantastic – a little more complex this time, but certainly along similar lines. Taste has a similar profile, but the flavors are much richer here. The Scotch flavors mix with the roasty chocolate in a more balanced way, and it’s just as compulsively drinkable as the 16. Fuller bodied, even. This is an amazing beer. Rich and complex, powerful and subtle, all at the same time. Rating this is weird. I have a pathological inability to give out the highest rating possible (I’ve only given it once, and that’s partially because that beer also has sentimental value and partially because I’ve had it so many times), but I’ve only had this once (right now!) Yeah, it’s rocking my world, but will it always do so. I’ll give it a provisional A+. It’s perfect, but given my above musings about redrinkability and the fact that I’m a sucker for the marketing fluff behind this, I’d like to try this again!

Well then, I now want to pick up the 12, 18, and 30 varieties of this beer. I’d also like to try and compare the 40 vs some other sort of barrel aged imperial stout. As mentioned before, these are quite expensive. The 40 was $20 for a single bottle, which is astronomical, but for me, it was worth it (and there’ve definitely been times when spending a lot on a single beer has disappointed me, despite the beer being really good – i.e. Allagash).