You may be able to tell that I have a bit of a sweet-tooth (for example, I love Brooklyn Black Chocolate Stout and I really enjoyed the Southern Tier Creme Brulee Stout, both uber-sweet beers). As such, Coca-Cola has long been one of my favorite beverages. However, I tend to drink too much of it, so every few years, I give up Coke for Lent. I find that the 40 day length of Lent makes for an ideal habit-breaker (Last year, I gave up television). Short enough that it’s achievable, long enough to make you realize that you don’t need to indulge in your habit quite so often. So this year, I’m giving up Coke again, which basically means that for the next 40 days or so, I’ll most likely be filling the void of Coke with beer.

As I mentioned in my post on Regular Beers for The Session, sometimes I don’t want a beer that will melt my brain and/or get me drunk after 12 ounces. So while I’m sure I’ll have my fair share of brain-melting beers over the next few weeks, I’m probably also going to avail myself of some more “regular” beers, usually during dinner. Lower alcohol, lower taste, but easier drinkability. Interestingly, this month’s beer club fit right into that strategy, with a few English session beers. And this weekend, I’m hitting up some pale ales. For these double feature posts, I usually try to match up with movies, but both of this weekend’s movies are in the theater, so no drinking whilst watching. But if you’re so inclined, The Adjustment Bureau was surprisingly good for a movie about people with magic hats (I guess that’s something of a spoiler, but it’s so stupid that I don’t really feel bad about it). Of course, you have to overlook a few plot holes and the aforementioned magic hats, but it’s still a pretty fun movie. After I finish this post, I’ll be heading out to meet a friend for Battle: Los Angeles. Expectations are suitably low, but I’m hoping to see shit blow up real good. It can’t be any worse than Skyline (the last Alien invasion movie I saw, which was abominable but almost worth it for the breathtakingly stupid ending) or, one would presume, the SyFy Original movie special that’s playing tonight: Battle of Los Angeles (I haven’t seen it, but if your movie isn’t as good as a SyFy Original…)

But enough about movies, onto the beer: 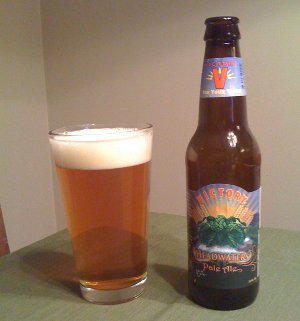 Victory Headwaters Pale Ale – Usually when a brewery makes it to a big Anniversary, they put out a special beer, and that beer is generally something extreme. An imperial stout, a double IPA, or something even crazier. So when Victory announced that they were making a 15th anniversary beer, I was expecting a big monster of a beer. Instead, they made this beer:

Reflecting over the years as we approach our 15th anniversary here at Victory, we can’t help but be struck by the realization that Downingtown has made a great home for Victory. From the enthusiastic throngs that crowd our brewpub to enjoy our creative, flavorful beers and cuisine to the natural charms of the area, we are blessed with good fortune. As the active community contributor we’ve been over those years, we recognize our opportunity to both utilize and protect these assets.

Chief among those assets is the pure water we receive from the East Branch of the Brandywine Creek that begins its journey to us just under 14 miles from where we brew with it. We’ll be celebrating this water (insert your lite beer joke here) with our anniversary beer, Headwaters Pale Ale, due to be released February 15, 2011.

That’s right, Victory is celebrating… water with this beer, a 5.1% ABV Pale Ale. According to Lew Bryson, Victory has apparently been working on this for a while, as this new beer follows their Pursuit of Pale Ale, which I stumbled onto at a happy hour a few weeks ago (alas, I didn’t save any notes, and the picture I took with my phone didn’t turn out well). An odd choice for an anniversary beer, perhaps, but I think they’ve managed to pull it off. Pours a golden, slightly orange color. Clear with a light head that left lots of lacing as I drank. Aroma is really nice, floral hops, maybe some citrus and an almost yeasty feel. Taste has a light, hoppy bitterness throughout, a little sweetness up front and maybe just a bit of citrus fruits along with the earthy bitterness. Mouthfeel is a bit on the thin side, but not overly so, and I think that’s what they’re going for. It’s certainly crisp and clean and compulsively drinkable (I should have bought a sixer of this!) As pale ales go, it’s an excellent example of the style and something I could certainly drink a lot of, but it’s not particularly aggressive either. Exactly what I was looking for, too! B+ 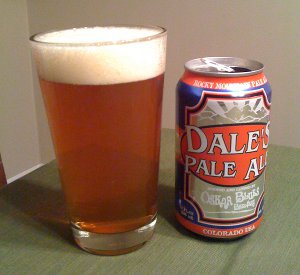 Oskar Blues Dale’s Pale Ale – Apparently the first modern craft-beer to be produced in cans, this beer has lead the way to several other canned craft beers, though they’re still somewhat rare. In the beginning, brewer Dale Katechis hand canned the beers (one at a time! Uphill! In the snow!) and sold them as a way to promote his restaurant, Oskar Blues Grill and Brew. They encountered some skepticism from beer nerds, but they eventually came around and now Oskar Blues is one of the big Craft Beer success stories. Cans actually do have some advantages, namely minimizing exposure to light (brown bottles protect, but not completely) and oxygen (unwanted light and/or oxygen can produce off flavors in beer, leading to “skunky” beers). Cans are also cheaper and take up less space. Modern can linings are also supposed to be better at not impacting the taste of the beer itself (something older cans may have suffered from). I bought a six pack of this a while back (and drank a few during my Oscars Liveblogging adventure) and have been enjoying them for a while.

It pours a bit of a darker, light brownish color. I wouldn’t call it hazy, but it’s not as clear as the Headwaters. Smell is a bit less complex, but also a little stronger. Earthy hops, all the way. Taste is definitely sweeter and maybe even a bit less hoppy, but still complex and flavorful. It has a fuller body, but is still quite drinkable. I’m having a hard time comparing these two beers. They’re both excellent for what they are and though they’re both distinct, their strengths and weaknesses seem to balance out. So I’ll give this one a B+ as well.

If you asked me which I’d rather have right now, I think I might choose the Victory. That may just be because I’ve only had one of those though, while I’ve had a few Dale’s lately. Of course, this won’t scare me away from the canned Oskar Blues beers and indeed, I just picked up some Gordon Imperial Red (apparently renamed G’Knight due to legal troubles started by dickheads at Gordon Biersch – more on that story in a review that will most likely be coming soon)…