Wherein I succumb to that annoying beer-blogger tendency to talk about limited-edition beers that most readers are unlikely to ever taste. Over at his new digs, Jay H. has had the opportunity to try out an ultra-rare, one-time-brewed, sour ale from The Bruery called The Wanderer. Not only is it a rare beer, but Jay has awarded it a 10/10 rating, which is pretty rare in itself. Alas, I will probably never cross paths with this beer unless The Bruery upgrades it to a staple brew…

Victory Brewing Co. has a different, less trendy reputation, but they also put out a lot of different beers, ranging from simple, session brews to whopping 12% face melters. I arrived at a local bar recently, scanned their beer menu and saw this Victory Perfect 10 Lager listed… I asked about it and found out that it was brewed specially for the bar, which had just recently celebrated its 10th anniversary (hence the beer’s title). Sign me up! Perhaps unsurprisingly, the beer isn’t even listed on Beer Advocate. It’s a relatively straightforward lager, so it’s not going to be a “White Whale” beer the likes of which I discussed earlier, but I actually did enjoy it quite a bit: 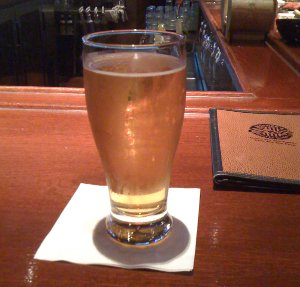 Pours a clear golden color with a minimal white head. Not much going on in the nose, but the taste is sticky sweet. Despite the stickiness, it’s a really clean feeling brew. Well carbonated and medium bodied but still smooth and easy to drink. It reminds me of Victory’s St. Boisterous Maibock, which I’ve also had recently. I actually seemed to enjoy this a bit more, which is a shame, as I’m pretty sure this will be the last I ever see of this brew. B+

Victory continues to be my local hero and I’m extremely excited to get my hands on some of their upcoming smoked dubbel style beer, dubbed (pun intended!) Otto. It’s not due to be released until mid-October though, so I’ve got a bit of a wait…

Have you ever seen that episode of The Simpsons where Reverend Lovejoy loses the faith and Marge becomes “The Listen Lady”? At one point, while Reverend Lovejoy sits alone and depressed in the church, the stained glass windows in the church come to life and chastise him for failing to inspire his congregation. The joke is that the circumstances of each window are rather gruesome: 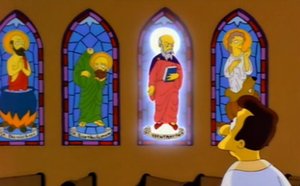 The one on the far left features a man standing in a boiling cauldron, the second one is a man holding his own decapitated head, and the last one is a man being eaten by a lion. This is mean to be parody; making fun of the Christian fascination with martyrs and the violence they endured. And yet anyone who has spent their childhood in Church and other related areas will see that, like a lot of parodies, this one strikes home more than you might suspect. Witness saint Adrian: 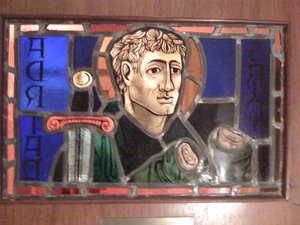 At first it looks kinda normal and then you notice… What’s the deal with that sword? Wait, where are his hands? Is that… bone? Yes, apparently St. Adrian was a martyr who had his hands cut off at the wrist. In all honesty, that Simpsons parody isn’t really that much of a parody.

Fortunately for the rest of us, Victory’s Spring seasonal Maibock, St. Boisterous, does not feature any such macabre imagery on its label, and the beer itself is generally more uplifting. 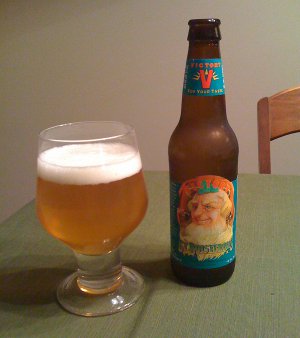 Victory St. Boisterous – Pours a clear golden/yellow color with a finger or two of head. Aroma is dry with a sweet malt character (maybe honey?) and some floral hops as well. There’s just a hint of fruitiness apparent. Taste is surprisingly hoppy at the outset, but it doesn’t last through the finish, which is sweet and sticky. Surprisingly rich and full bodied for such a light colored beer. The alcohol is more prominent than expected, all throughout the taste, which I guess means that this beer is living up to its boisterous name. Overall, it’s still an interesting beer that’s reasonably well done. B

Victory also makes a Doppelbock called St. Victorious, which I’m pretty sure I’ve had before, but not recently. I’ll have to try that one out (it’s a Winter seasonal, so I’ll have to wait a while).

To follow up my Shoktoberfest adventure, I did a quick search of my cellar (i.e. my fridge) and settled on a bomber of Rogue’s Dead Guy Ale. There used to be a great beer bar in the gleaming metropolis of Norristown, PA called the Moody Monkey. Before my recent obsession with craft beers, the Monkey represented my primary exposure to the craft beer world. It’s where I discovered the joys of Ommegang (pretty much by accident) and a friend of mine would always order some Dead Guy Ale (he was a Grateful Dead fan, so I’m guessing his initial inspiration wasn’t born out of good taste, though it’s certainly a good beer). I had some of it way back then, but it’s obviously worth revisiting, so here goes: 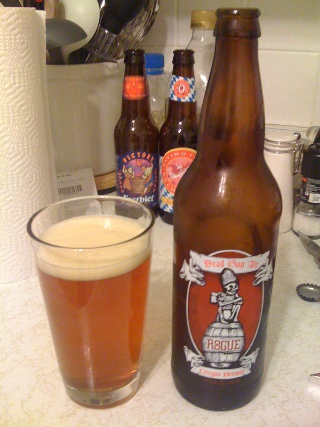 Rogue Dead Guy Ale – Pours a light amber color, about a centimeter of head, nice malty smell. Definitely not an Oktoberfest, but drinking it right after two of that style was interesting, as it has some similar properties. Not as sweet or dry, but still kinda nutty with a nice, lightly bitter finish. It’s also more flavorful and better balanced than the Oktoberfests that I had. BA lists it as a Maibock style of beer, which appears to be a lighter strain of traditional Bocks. I really enjoy this beer. B+