No one wants to admit that they like peanut butter beers, but brewers are out there making them all the time, so I guess some people actually do… My inner curmudgeon gets mighty suspicious about gimmicky ingredients but even that bastard can kinda see the appeal of peanut butter beer if he squints. I mean, he’s never truly loved one… but he gets why someone would drink it.

Of course, Curmit (the name for my inner curmudgeon that I just made up because typing out “inner curmudgeon” every time seems like a waste and yes, I’m aware that I just wrote the words out twice in a long paranthetical, but Curmit thought it would be a good idea and I like that guy) can be won over if you play to his biases. Like, say, aging your peanut butter beer in bourbon barrels for almost two years.

To be more specific, Weldwerks Barrel-Aged Fluffernutter starts with a big imperial stout base that is aged in freshly emptied 6-12 year-old bourbon barrels for 19-21 months, then conditioned on peanut flour, toasted marshmallows, marshmallow creme, and Vanuatu vanilla beans. Curmit might have been a little suspicious and he probably likes plain old BA Medianoche better, but he thinks that marshmallow is a better fit in beer than some sort of fruit/jelly (i.e. fluffernutter is a better idea than PB&J when it comes to beer) and we’ve already established his love of vanilla. One sip was enough to convince him this endeavor was worthwhile:

WeldWerks Barrel-Aged Fluffernutter – Pours a deep, dark brown, almost black, with just the faintest ring of tan head around the edge of the glass that disappears quickly. Smells great, bourbon, caramel, oak, peanuts, and vanilla. Taste hits the rich caramel up front, moves quickly into that fluffernutter peanut and marshmallow, followed by boozy bourbon and oak in the finish. Mouthfeel is full bodied, rich, and chewy, the bottle doesn’t have an ABV on it, but it’s plenty boozy with some pleasant warming alcohol character. Overall, yup, it’s spectacular and all the doodads and extra ingredients work well enough, especially as a change of pace. A

This is one of those beers that would have been great to bring to a share… if we weren’t in the middle of a pandemic. I miss shares, is what I’m saying. Anywho, I’ve really enjoyed WeldWerks’ barrel aged program, so I will always seek them out. Even if they have gimmicky ingredients that don’t necessarily excite Curmit.

You know what, screw it, bonus review! One of Curmit’s favorites here, also from WeldWerks:

WeldWerks Medianoche – I didn’t take tasting notes for this, but Curmit loves this thing and there’s plenty to say about it. Legend has it that this big imperial stout was designed to stand up to extended barrel aging, and while brewing process details are often uninteresting, this one has a standout step that I think pretty much anyone can peg as extreme: After mashing in, they then put the resulting wort through an arduous 36 hour boil (for context, most beer goes through a 1 hour boil). After fermentation, the beer goes into 7-12 year bourbon barrels for 18-24 months. Don’t take my word for it, here’s an interview with the brewer:

“So, we designed the beer from the ground up, using the barrel, the spirits from the barrel and the time spent in the barrel as essential ingredients, and made adjustments to the recipe accordingly,” he explains. “After several years of tweaking and pushing the barrel character further and further, we have landed on an incredibly high-gravity stout that is 100% malt-derived. That means no extracts, syrups or other sugars. To achieve those targets, we boil each batch for over 30 hours, which is insanely inefficient and labor intensive, but it has resulted in a beer that can hold up for 18-plus months in casks and showcase all the complexities our barrels have to offer.”

The result is phenomenal. The base retains some of its roasty notes, but the typical caramel, oak, and vanilla barrel aged character is also there in full force. Totally delicious, complex, but well balanced stuff, and worth seeking out. A

So there, both Weldwerks Fluffernutter and Medianoche are pretty great stuff, if you can get ahold of them.

The process of blending to create a new or maybe more consistent end product is something you see quite often in the laboratories of mad scientists and other practitioners of super-science. Picture lots of bunson burners, beakers, test tubes, and those weird spirally things where strange liquids are being shunted around. I’m pretty sure that’s how they do it with whiskey and to some extent in wine as well. In particular, alcohol that’s aged a while tends to go through a number of unpredictable and uncontrollable maturation processes, resulting in “good” and “bad” barrels. Due to the inherent cost in production and aging (especially for whiskey, which is aged for very long periods of time), you don’t necessarily want to just chuck the entire barrel. Blending allows you to mask some of those “bad” barrels with the good ones or at least drown imperfections (in the whiskey world, blending often has a bad connotation due to using neutral grain spirits that haven’t been aged at all). It also allows you to keep out-of-work supervillains employed, thus preventing their bored meddling with super-science. Ultimately, though, this can result in something bland, yet very consistent. That being said, the proliferation of “single barrels” and “single malt” Scotch does indicate that there’s a desire for more expressive offerings. The grand majority of beer doesn’t really come close to “blending” (our mad scientists tend to experiment much more with weird ingredients), but there’s a growing coterie of brewers and drinkers that are very much into barrel aging and thus, blending. So let’s break out some beakers and test tubes, it’s time to blend.

Now that I’ve downplayed it, I’m realizing that blends do actually take many forms when it comes to beer. You’ve got your Gueuzes, which are blends of 3, 2, and 1 year old lambic. Indeed, as I understand it, many barrel aged beers will have a small proportion of “fresh” beer blended in to liven up the finished product. Then there are the situations where brewers will take a bunch of different releases, and blend them together in a hopefully harmonious way. Think about The Bruery’s Melange series or Firestone Walker’s Anniversary Beers. Then you’ve got breweries that manage some sort of Solera-like process, like The Bruery’s Anniversary beers. A lot of sour beers utilize blends to even out what is an even more unpredictable process than usual (the added variable of wild yeasts and bacteria make for an interesting ride). One of the most fascinating beers I’ve drank was Allagash’s PNC Broken Elevator, a blend of many barrels. The beer was good, but the interesting thing was that they actually released notes for each barrel included in the final blend, including barrels that were not used (mostly because they had too much “solvent” character).

Then you have situations in which the same beer is given different barrel treatments, then blended together afterwords. You’ll often see beers getting a double barrel treatment (sometimes both of the barrels used would be the same type, but sometimes you get a mixture like Bourbon/Apple Brandy, or Bourbon/Rum, and so on). In today’s review, we’re covering a beer that is a blend of 9 different barrels, from 5 different types of spirits:

The average age of the beer is 19 months, which is a pretty impressive number for beer. The barrel selections all seem pretty interesting (44% are bourbon barrels, 22% apple brandy, with the brandy, rye, and rum barrels all hitting 11%). Alas, this seems to be an object lesson in how blending can mute some of the most expressive aspects of each barrel. That doesn’t make it a bad beer, but it’s telling that while I’ve had about 6 or 7 different variants of Medianoche, my absolute favorite was a single barrel bourbon one that I had in Denver before GABF. This beer has some complexity, but it feels like they may have overdone it on the number of components in the blend, as no one barrel feels particularly distinct here. It’s not a bland beer, that’s for sure, but it doesn’t stand out as much as the other variants. 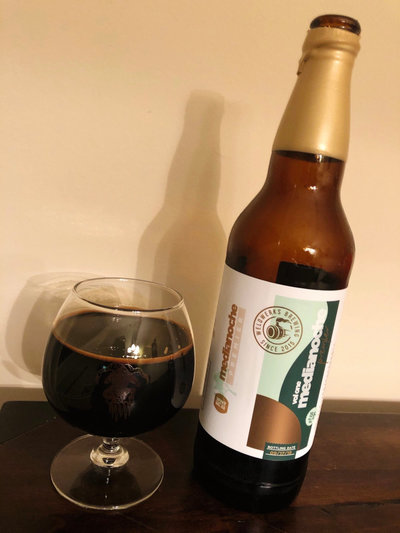 WeldWerks Medianoche Premier Vol 1 – Pours a deep, dark black color with just a faint collar of light brown head. Smells great, lots of boozy barrel character, caramel, vanilla, brown sugar, molasses, and a hint of roast in the background. Taste is also pretty good, lots of caramel, brown sugar, and booze (I get bourbon and brandy the most, but obviously there’s more going on here). Mouthfeel is low carbed but appropriate, full bodied, rich, with a pleasant boozy hotness. Overall, the blending of different spirits barrels seems to make the components less distinct in the finished product, which is still pretty fantastic, though not the equal of some of the other Medianoche variants I’ve had… I want to give it an A-, but in relation to other Medianoche variants, it’s probably more of a B+ or even B

Plain ol’ Medianoche appears to be my favorite expression, but some of the more out there variants (i.e. Malibu Medianoche or the Peanut Butter Medianoche) are pretty interesting, and everything I’ve had has been pretty damn good. I’m definitely in the market for more of these suckers… I didn’t go to WeldWerks when I was in Denver, but their beers did represent some of the highest highlights of the week…