It’s been amply established that my inner curmudgeon tends to prefer regular, plain ol’ bourbon barrel aged stouts (or life, for that matter). Bottle Logic Brewing has quickly garnered a good reputation for barrel aged beers, but also for kooky ingredients like poppy seeds, marionberries, cassia bark, and all manner of coffee, coconut, fruit, and so on. While I like a good pastry stout as much as the next guy, that curmudgeon in me generally wants to know what the beer’d be like if it didn’t have all the adjuncts and fancy doodads. I’m often happy to try a kitchen-sink variant of a great beer, but I usually find that the base remains my favorite. That being said, there is one kinda/sorta exception to the rule, and that’s vanilla. For whatever reason, my inner curmudgeon loves him some vanilla.

Now, yes, vanilla is generally a requirement for any pastry stout, but I think there’s something to do be said for a well balanced dose of vanilla without any of the other hoopla. One of the reasons coffee is such a popular addition to stouts is that it adds complementary roasty, bitter flavors to the beer. Now I don’t drink coffee, so that doesn’t resonate with me as much as vanilla, which also tends to be a complementary addition, particularly to the barrel character. A lot of people use “vanilla” to mean “boring” or “plain”, but those people are basically just wrong. Vanilla is a fundamental cooking ingredient that is great on its own, but is also often used as a foundation to strengthen and build other flavors upon.

So what we have here is a big imperial stout aged in a combination of Buffalo Trace, Woodford Reserve, Four Roses, Heaven Hill, and Knob Creek bourbon barrels (so, uh, a pretty broad cross-section of the major players in the bourbon world), with multiple additions of Madagascar vanilla beans. My kinda pastry: 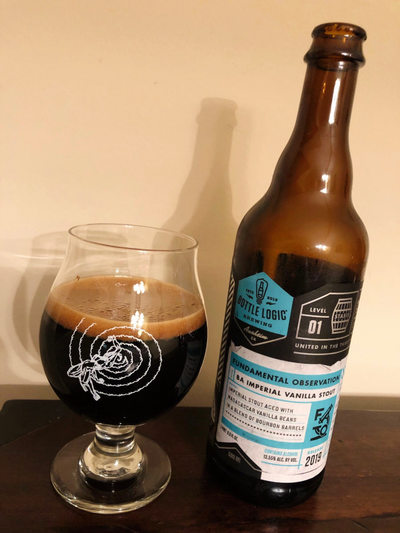 Bottle Logic Fundamental Observation – Pours a very dark brown, almost black color with a half finger of light brown head. Smells fantastic, plenty of vanilla, but also underlying caramel, bourbon, and oak. Often, added vanilla overpowers everything else (and since I’m a big fan of vanilla, that’s not much of a big deal, but I digress), but here it’s prominent without being overbearing. Taste is rich caramel up front, with that vanilla quickly emerging, followed by a little underlying roast, and a big, boozy bourbon and oak bite in the finish. Mouthfeel is rich, full bodied, and chewy, well carbonated, and pleasantly boozy. Not quite the perfect balance that the nose would imply, but close enough. Overall, yes, it’s a pretty damn spectacular beer. A-

I’ve had and enjoyed quite a few of Bottle Logic’s barrel aged wonders, but come to think of it, I don’t think I’ve had a plain BA stout from them. Everything has vanilla or coffee or pumpkin spice, &c. So even though I love this Fundamental Observation, I’m genuinely curious about a BA stout with no other additions… I”m sure they make one, I just haven’t come across it yet. In the meantime, I’ll just have to drown my sorrows in whatever Bottle Logic hooch I can get my hands on…