You wouldn’t expect peanut butter beers to be much of a trend, but then, what isn’t a trend in beer these days? If brewers are throwing everything and the kitchen sink into their beers, why not peanut butter? Well, it turns out that putting actual peanut butter or peanuts into the brew isn’t particularly wise because they’re full of oils that don’t play nice with beer (particularly with respect to head retention). But you can use peanut extract or peanut butter powder, which has most oils and fat removed. Then prepare yourself to fend off accusations of gimmickry! It’s all part of the beer game.

Over the past few years, I’ve seen quite a few of these beers picking up steam and turning some heads. Sweet Baby Jesus, Purple Monkey Dishwasher, and Liquid Bliss are all pretty decent beers with intense peanut buttery character. I’m sure Funky Buddha’s artificial flavor wizards have cooked up something like this too (update: it’s called No Crusts). It is an unexpected flavor for a beer, but once you get over the initial shock, it sorta feels comforting, conjuring nostalgic memories of PB&J sandwiches or Reese’s Peanut Butter Cups. Gimmicky? Definitely. Certainly not something I go out of my way for or even crave very much, but it’s nice to branch out every once in a while and I’m a big tent kinda guy.

During my latest spin through Vermont, I noticed that I was basically purchasing all IPAs and saisons, so I deliberately snagged Burlington Beer Co.’s Chunky, a 12% ABV peanut butter porter (apparently this batch used 50% more peanut butter powder), in order to, well, not balance out my purchases… But after drowning in IPAs for a while, this was a welcome change of pace: 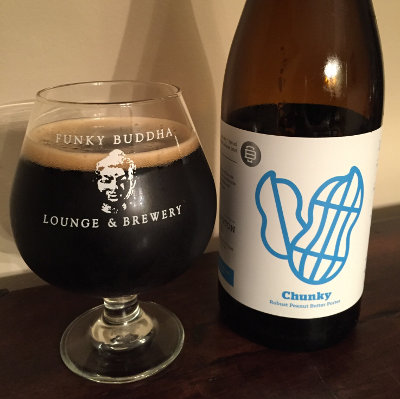 Burlington Beer Co. Chunky – Pours a lighter brown color than your typical porter or stout, but still dark enough, with a finger of off white head. Smells decent, that peanut butter comes through, but also a bit of bitter chocolate and even a hint of something fruitier. Taste starts off quite sweet, light on the peanut butter but it’s there in the middle, finishing on that odd fruity note. The peanut butter character is not huge, but then, it doesn’t feel artificial either (a trap some of these beers fall into). Mouthfeel is well carbonated (but not overcarbonated), medium to full bodied (perhaps a bit lighter than you’d expect for a 12% beer, but I wouldn’t call it too thin either), a hint of boozy heat. Overall, it’s an interesting take on the peanut butter stout, a little less focused on the peanut character than your typical take, but maybe more interesting for that. B+

One more Burlington beer in the pipeline, and I have a feeling it’s going to be a good one, so keep your eyes peeled for that one soon enough…