Apparently one of my favorite local beer nerd establishments got their hands on a sixtel of the fabled Pliny the Younger (currently Beer Advocate’s #1 Top Beer on the planet). They posted about it on Facebook late last night, and they opened their doors at 10:30 am this morning. Ten minutes later, it sold out. Someone posted on facebook: “Sorry job-havers.” Curse my responsibility! I’m sure the beer is great, but at this point, I can’t help but think that it would never live up to expectations and I probably won’t go too far out of my way to get my hands on the stuff. It’s true, we are one of the lucky markets that gets a taste of the stuff, which is nice, I guess, but from what I can tell it’s always an absolute madhouse, and tastings sometimes only consist of a few ounces. I certainly wouldn’t turn any down, but it just doesn’t seem worth the colossal stretch required. Of course, I say this now, but next year I’ll probably post about how I stood outside in a snowstorm for 4 hours just to get a tiny 0.1 ounce sample applied to my tongue with an eyedropper.

In the meantime, I’ll just have to deal with the oodles of other great IPAs on the market, of which there certainly is no shortage. But tonight, I’m reviewing a pale ale even further down the spiral (apologies for the craptacular blurry picture): 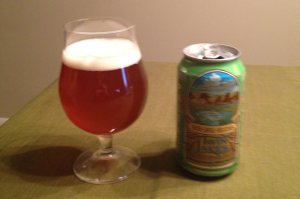 Twin Lakes Greenville Pale Ale – Pours a hazy golden orange color with a finger of whitish head. Lots of floral hop aromas in the nose. Unusual flavors hit the palate first, perhaps that floral hop flavor is more prominent than the nose advertises. Actually a bit of spiciness to the taste as well, also probably from the hops. Just a faint amount of bitterness in the finish. Seems a bit simplistic. Carbonation is very strong and almost biting, though the body is still rather light. Doesn’t go down quite as easy as I’d hope. Overall, I’m not too taken with this beer. It’s not horrible, but something about the hop profile doesn’t work for me. C+

Ok, so this ain’t quite a Pliny substitute, but a few upcoming reviews could perhaps hit a little closer to the target.