Having just endured Blizzard Jonas this past weekend, I figure it’s time to dig through the svelt 25″ of snow outside and then come back inside and review beer. In truth, being snowed in particularly suits my temperament, so long as I don’t lose power or internets (and even then…) Anyway this beer seems particularly appropriate, as Siberia is famed for its short summers and long winters of punishingly cold climate. That’s “punishingly” in an almost literal sense, actually. The Russian Empire had a system of penal labor called Katorga in which prisoners were sent to remote areas (where voluntary workers were never available in sufficient numbers) and forced to into mining or lumber production. The Soviets later incorporated and expanded on the concept with the Gulag system. If you’ve ever read One Day in the Life of Ivan Denisovich, you know that Siberia is not generally a place you want to be.

Of course, this is a brewery called Thirsty Dog we’re talking about here, so I don’t think they were channeling Alexander Solzhenitsyn with this beer. Instead, they were probably thinking of adorable Siberian Husky memes. 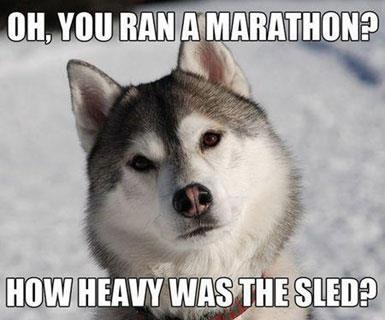 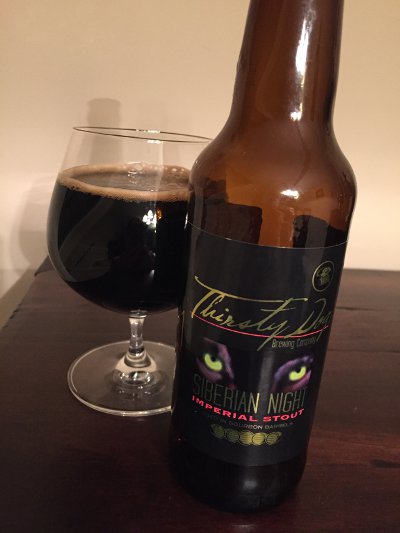 Thirsty Dog Bourbon Barrel Aged Siberian Night – Pours a deep, dark brown, almost black color with a finger of light brown head that sticks around for a bit. Smells nice, some roasted malt, lots of vanilla, some bourbon and oak too. Taste has a rich caramel character up front, a little chocolate, oak, and vanilla pitching in, hints of boozy bourbon, with a little bit of roast coming to the fore in the finish. Mouthfeel is full bodied, rich, well carbonated, lightly boozy. Overall, this is a pretty approachable BBA stout, well balanced, tasty, a step up from the beginner’s stuff, but not quite top tier. A-

The regular non-BA version is pretty solid as well, and it’s companion beer, Wulver has become one of my favorites.

In Scottish folklore, the Wulver is a kind of werewolf, but not the kind you’re familiar with. Wulvers are not tortured human souls, cursed to yield to the beast within on the full moon. Nor do they have, like, a bazillion abs and fall in love with a passive girl who’s knocking boots with a vampire. Not that I’d know anything about that. In fact, Wulvers aren’t even human; they’re merely a human-like creature with a wolf’s head, and they’re not known to be particularly aggressive… unless provoked. Wikipedia sez: “He didn’t molest folk if folk didn’t molest him.” Uh huh, interesting choice of words. Anywho, it also sez Wulvers are fond of fishing, and perhaps they’d drink a beer like this one whilst kicking back. That’s a blind speculation on my part, but it’s a wee heavy style beer aged in bourbon barrels for 11 months, and who wouldn’t want to sip on one of those whilst fishing in Scottland? Ok, fine, perhaps the Wulver would molest the bottle. There, you happy? No? Fine, then just look at the pretty picture: 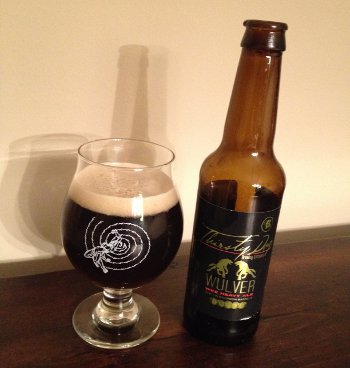 Thirsty Dog Wulver – Pours a dark brown color with a finger of tan head that has pretty good retention. Smells deeply of bourbon and oak, some caramel, maybe even something smoky, and huge, sweeping vanilla aromas too. Taste starts with rich caramel, a hint of dark and/or smoky malts (very subtle smoke, if it’s there) yielding to that bourbon barrel treatment and those big vanilla notes towards the finish. Maybe a bit of dark fruit as it warms up, and a bit of pleasant booze too. Mouthfeel is perfect, well carbonated but silky smooth, rich and almost creamy. Overall, yep, this is a winner for sure. A-

The label sez they made this beer specifically to be aged in Bourbon barrels, and I do believe they’ve succeeded in that task. Now I’m going to have to keep an eye out for that BA Siberian Night, though wonder of wonders, Wulver seems to be the more highly praised of the two (normally the Imperial Stout is the more popular offering). 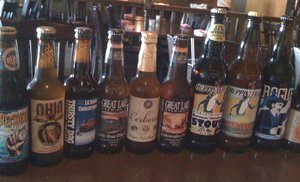