Tonight was beer club! For the uninitiated, beer club is a gathering of beer-minded individuals from my workplace who get together once a month for beer and revelry at a local BYOB. This time around, we returned to an Indian/Thai restaurant and despite a medium turnout, had much in the way of fun. 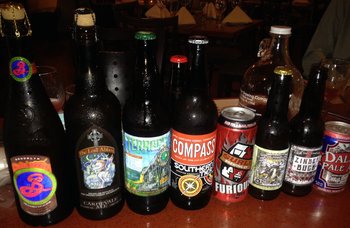 For the sake of posterity, I’m documenting my nearly incoherent thoughts on each beer below, which is my way of saying that you should not trust any of these ratings because as we’ve established recently, I’m the worst. In order of drinking (not necessarily the order pictured above):

And that is all for now. We will probably return to regular blogging next week, so stay tuned.