During these pandemic-crazed times, I’ve tried to pay extra attention to local breweries I enjoy. It’s not like I was going to serendipitously stumble upon one of their beers on tap at a local beeratorium, so I made sure to go out of my way to pick up some beer at a bunch of places, including Phoenixville’s own Root Down Brewing.

I don’t get out there very often, but I like their style, I’ve got a friend who works there, and their founder/brewer was my very first homebrew purveyor. Oh yeah, and they brew good beer. Let’s kick it Root Down (And Get It):

Root Down Brewing Crispy Boy – Just look at that can art! Does anyone remember Charles Chips? They were a snack company that specialized in potato chips packaged in distinctive tins and delivered right to your home on a regular schedule. Seriously, it was like the old-style milkman, only for potato chips. You’d finish your tin and put out the empty one and the Charles Chips delivery truck would pick up the old tin and deliver you a new one. Anyway, the design of this can calls to mind the Charles Chips logo, which was a nice nostalgic surprise. But how was the beer?

A dry-hopped American Pilsner, it pours a striking clear golden yellow color with a few fingers of fluffy white head and good retention. The aroma has lots of bright citrus hops with an underlying pilsner cracker character. Taste hits those pilsner notes more than the nose, crackers and biscuits, but the citrus hops are present, if more subdued. Consequently, this makes it feel more like a pils. Mouthfeel is crisp and clean, light bodied and well carbonated, quaffable. Overall, it’s a good pils with some American hop character layered in, very nice. B+

Root Down Brewing The Mock – A unfiltered hazy South Eastern IPA (SEIPA – presumably a play on SEPTA, our craptacular transit authority) hopped with Comet, Azacca, and El Dorado hops. Pours a murky yellow orange color with a couple fingers of head. Smells of sweet, tropical fruit hops, candied mango and the like. Taste hits those bright tropical citrus flavors up front, sweetness balanced by a moderate to high bitterness in the finish. Mouthfeel is medium bodied, well carbonated, a little sticky sweet up front with some balanced dry bitterness in the finish. Overall, rock solid little IPA here, probably my favorite IPA from RD… B+ or A-

Rock solid stuff from Root Down, as per usual. Now that things are opening up again in PA, I may have to make the trek up to Phoenixville again soon…

Root Down Brewing opened its doors earlier this year, and it was an event I had been anticipating for a while. The owner/brewer, Mike Hamara, was the guy who sold me my homebrew setup many moons ago. On at least one occasion, he improvised a complete recipe from scratch for me because I needed something quick and didn’t have time to prepare (I’m the worst). To put it mildly, this is a guy who knows what he’s doing, and has been planning this operation for years, if not decades.

Located in Phoenixville, PA, the building is deceptively large and punctuated by graffiti inspired decor. Chances are, there will be some sort of obscure martial arts film playing on the TVs (though they will cave in and put the Eagles game on if someone asks), and indeed, some of the beer names (like the below Flying Guillotine IPA) are inspired by said movies (truly a brewery after my heart). I didn’t have any food during my visit, but they have a menu of BBQ goodies and even a whole page dedicated to Vegan offerings, such that I’ll definitely be checking this stuff out upon future visits. 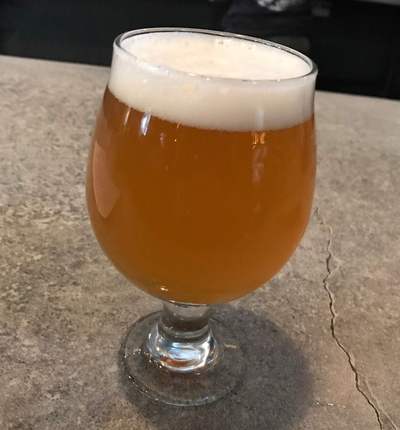 I visited on a Sunday when they were releasing a particular beer made in cahoots with BeerNERDs (N.E.R.D. stands for Network of Educated Refined Drinkers), with proceeds going to Main Line Deputy Dog, a local charity that helps with training service dogs for those in need. For the uninitiated, BeerNERDs is a group of, well, nerds centered in southeastern PA with smatterings of members from MD, DE, and NJ. There’s a Facebook Group of 5000 plus members, which naturally leads to the occasional, erm, argument. Tensions mount, some people can’t handle it, others pile on, and then a full blown meltdown ensues. One particular meltdown centered on Root Down taking forever to deliver an ordered beer. I can no longer find specifics of the complaint, but the guy was awfully strident in his distaste and apparently greatly exaggerated his experience, as it was later revealed that he had only been around for a scant 107 seconds before up and leaving the place. But these details are unimportant; Root Down and BeerNERDs decided to relax and remember that it’s just beer, eventually deciding to collaborate for charity.

So finally we get to the beer, a 10.7% ABV (I see what they did there) imperial oatmeal stout brewed with bitter chocolate and slow molasses. Sounds wonderful, so let’s kick it root down: 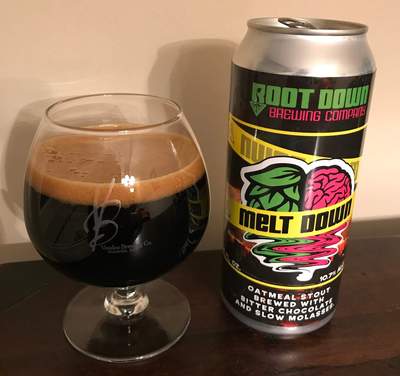 Root Down Melt Down – Pours a very dark, deep brown, almost black color with a finger of brown head. Smells of roasted malt, dark chocolate, maybe a little coffee note, and that molasses tang in the background. Taste is rich and sweet up front, with a bitter roastiness emerging quickly, leavened a bit by the molasses, then returning to roast, coffee, and chocolate in the finish. Mouthfeel is rich and full bodied, solid carbonation, a hint of boozy heat. Overall, rock solid imperial stout. Rumors of barrel aged variants in the future, so let’s leave some room for such endeavors in the rating, making this a high B+

Very much looking forward to more trips to Root Down, as well as seeing some of their barrel aging efforts come to fruition…