de Garde has made a several variants of a beer called Saison Desay. Near as I can tell, they had no real reason to use the word Desay (I mean, maybe they’re big fans of the crappy electronics company or perhaps the unique wooden window found in Kathmandu, but I’m doubting it)… until I saw this beer. Did… did de Garde wait three years to blend this beer just so they could make an Odyssey pun with this beer name? I’m probably just the worst, but I like to think that someone at de Garde was willing to go to such elaborate lengths for such a trivial pleasure.

Anyway, this beer is a blend of one, two, and three year-old oak barrel and oak tank matured Petit Desay. A neat, gueuze-like approach to the blending (though obviously not an actual gueuze, which has additional rules concerning wheat in the mashbill and aged hops, etc…) makes this one of the more intriguing offerings I managed to acquire from these Oregonian spontaneous ballers… I couldn’t find any details on the proportions of the blend, but I think it’s safe to assume that there is more of the younger components and less of the older. Whatever the case, it’s a worthwhile exercise. A beer odyssey, you might say: 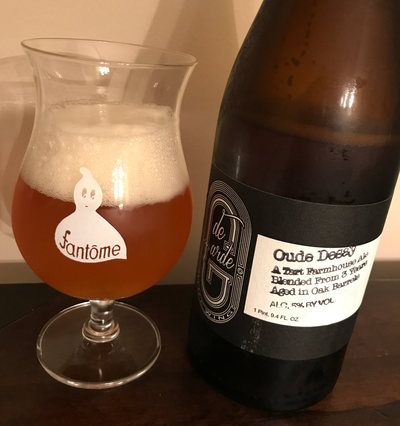 de Garde Oude Desay – Pours a slightly hazy golden orange color with tons of head that sticks around and even leaves a bit of lacing. Smells great, saison yeast spicy phenols and fruity esters, definitely a light, raisiny character that aged Belgian styles give off, but also some musty, earthy funk lingering in the background. Taste hits those saison notes up front, spicy with cloves, fruity with vinous fruit, hints of raisin, but this is all overtaken by a growing sourness in the middle through the finish. Mouthfeel is light bodied, crisp, dry, highly carbonated and effervescent, with a moderate and pleasant acidity. Overall, this is the best de Garde I’ve had yet, certainly reminiscent of the others (they’re all saisons of similar stock, so I guess this makes sense), but with more complexity and balance. A

As per usual, I’m always interested in checking out more from these fellows at de Garde. Alas, nothing in the pipeline. Woe is me.

I love pretty much everything I’ve had from de Garde, but I must admit that I’m starting to get a sorta samey vibe from much of what I’ve managed to procure. Sure, those fruited Bu variants (especially the imperial ones) are making waves and are obviously diverse in terms of flavor, but there also seems to be an unending series of 5%ish tart saison/American wild hybrids that are delicious, but again, samey. This isn’t the worst thing in the world, of course, and making consistent wild ales is an achievement in and of itself. Plus, as I continue to evolve as a beer dork, this sort of consistent, approachable, 5% offering is more appealing than ever. It’s just a lot easier to write about something that blows your mind (or the reverse situation of a beer that is a disaster). Blogger problems, bro.

It’s probably also worth noting that a low-level trading dilettante like myself doesn’t really pull the truly face-melting offerings from these Tillamook ballers. Not that I’m bitter. Which is usually, like, an ironic statement, but I’m genuinely not bitter, because this is some really tasty stuff, and as these things go, it’s still in the top tier. It’s just that there’s not much to say about this wild farmhouse ale aged in oak with unspecified fruit & spices. Except that I’ve now written a couple of paragraphs about how I don’t have much to say, so, um, let’s just get to the beer: 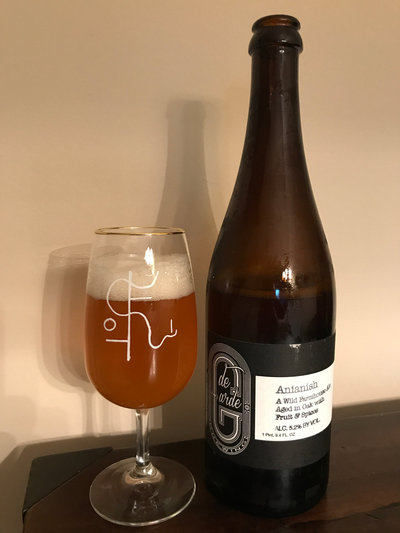 de Garde Anianish – Pours a golden orange color with a finger of white head that sticks around for a while. Smells of saison spice and fruity esters, a little bit of oak and funk. Taste is sweet and spicy, with lots of tart, vinous fruit, not quite sour but enough of a bite. Mouthfeel is medium bodied, well carbonated, and tasty. Overall, this is some great stuff. A-

No more De Garde on hand at chez Kaedrin, but I expect more to come my way soon enough. I would like to actually review one of the many Bu variants (the last one I got, I foolishly shared with other people in a setting not conducive to reviewing) and what the hell, maybe someday I’ll manage to snag one of those face-melters like Broken Truck…

One of the most interesting breweries to open their doors in the past few years, Tillamook, Oregon’s de Garde brewing has been making waves in the beer dork community. I got my first taste of their wares at a share last year, their Yer Bu (one of many Berliner Weisse inspired variants) was incredibly nimble at just 2.3% ABV and yet turned out to be one of the highlights of the night. Since then, I’ve heard enough about these folks to know that they make beer that’s worth seeking out.

What makes them so special? While some breweries have worked with spontaneous fermentation (notably Allagash and Jester King, amongst others), it appears that de Garde is the only U.S. brewery to rely solely on spontaneous fermentation for their beer. And what does that mean? They don’t use laboratory cultured yeast, they simply cool wort in a coolship, which is basically a huge, wide pan that exposes the wort to naturally occuring yeast and microflora, after which the wort is dumped into oak barrels of varying sizes and left to slumber until ready to be blended. As Pat’s Pints opined, “the brewers at de Garde pitch yeast with the same frequency that the Trappist monks in Westvleteren have sex.”

I’ve had discussions with wine-loving friends about terroir in beer, and while I usually point towards hops in said discussions, I think this sort of brewery deserves mention. It turns out that the year round temperate climate mixed with a mess of rivers and estuaries leading into the nearby Tillamook Bay has created conditions ideal for spontaneous fermentation. Indeed, they even experimented for over a year in trying to find a location for the brewery:

So we took wort and exposed it in different areas up and down the coast and tracked fermentation circuits over the course of a year or more. We narrowed it down to a few places and proceeded to do more trials to see if there’s consistency. Finally, we narrowed it down to Tillamook for the most viable opportunity. In the US we don’t have the benefit of a long history of this truly wild and natural brewing. So it took this extra exploration to see what works.

Tillamook: it’s not just for cheese. Anyway, that’s some serious dedication there, and from what I’ve seen, it’s paid off. I’ve had small pours of a few beers from them (all uniformly excellent), but these are the first I’ve managed to procure for myself. They aren’t the most prized releases and indeed are among the offerings that take the least amount of time to produce, but they’re quite nice nonetheless and someday I hope to procure the more lambic-like releases (which they seem to be gravitating towards anyway). For now, we’ve got saisons! 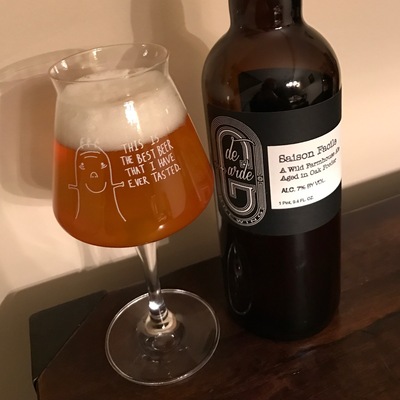 de Garde Saison Facile – A wild farmhouse ale aged in an oak foeder – Pours a clearish honey gold color with a finger or two of fluffy, medium bubbled white head that leaves some lacing as I drink. Smells nice, big waft of musty Belgian yeast spice, a little earthy funk, some fruity notes. Taste hits the sweet, tart, lemony fruit notes much harder than the nose would imply, but that yeasty spice and light funk are still there, with a light sour bite in the finish. Mouthfeel is well carbonated, crisp, and effervescent, not quite dry but the carbonation lends that impression, with low to moderate acidity. Overall, a rock solid foudred saison. B+ 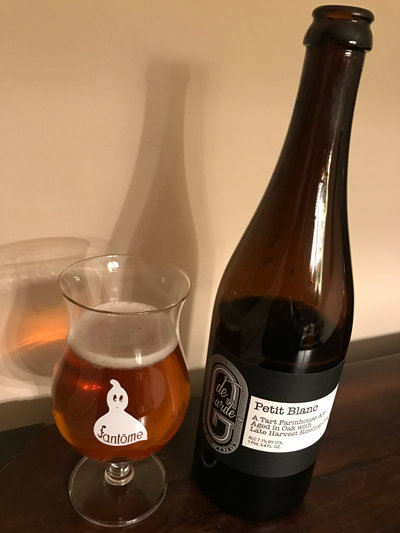 de Garde Petit Blanc – A tart farmhouse ale aged in oak with late harvest Riesling grapes – Pours a clear golden color with a finger of fluffy, dense head that quickly dissipates. Smells nice, lots of spicy Belgian yeast, a little oak, plenty of vinous fruit. Taste is sweet, vinous, fruity, with some spice in the middle, followed by oak and a little tartness emerging in the finish. Mouthfeel is well carbonated, medium bodied, less dry than the Facile but quite nice. Overall, another great saison offering. A-

Must. Get. Moar. Would love to try their more lambic-inspired beers. Alas, those seem quite prized (see: The Broken Truck) and until production increases, I’m guessing it’ll be saisons and Bu variants for me. I know, boo hoo, poor me.