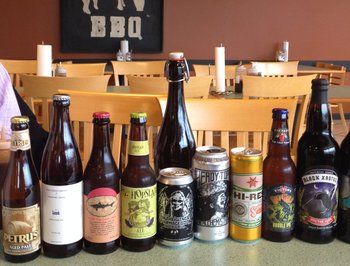 Yet another storied brewer makes its way to PA, and novelty whore that I am, I tried some. DC Brau is a small brewery located in Washington, DC, home of the Beerbecue. As such, I’ll let him explain the story behind this particular beer (by which I mean that I’m too lazy to do so myself):

The Corruption is named for “the corrupt bargain”. What’s that you say? Well, in the 1824 presidential election, when no candidate had a majority of the electoral votes, the 12th article of amendment to the Constitution dictated that the House of Representatives had to break the “tie” between the 3 candidates who had the highest number of electoral votes. “The corrupt bargain” refers to the rather dubious dealmaking of Henry Clay in securing the White House for John Quincy Adams. In doing so, he out-Blagojeviched Rod Blagojevich and was quite coincidentally appointed as John Quincy Adams’ Secretary of State.

As noted at Beerbecue, this was a pretty gutsy move on Clay’s part, as Andrew Jackson is in the top 3 most badass Presidents of all time (perhaps a dicussion best saved for later).

Anywho, the beer itself is a relatively straightforward single hop IPA, made with Columbus hops. These are not particularly trendy hops, but let’s just say that hops corrupt, and Columbus hops corrupt absolutely. A nice accompaniment to this smoke-filled room, if I do say so myself: 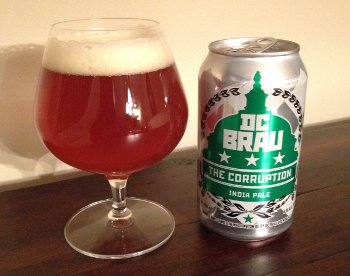 DC Brau The Corruption – Pours a deep orange color with some coppery tones and a couple fingers of fluffy white head that has pretty good retention and leaves some lacing as I drink. Smells full of citrus and pine hops (I originally guessed Simcoe, but as I learned later, it’s Columbus) But also something I can’t quite place, perhaps a malt or yeast focused difference. Taste has more of that stuff I can’t quite place, along with a heaping helping of citrus, resinous pine, and earthy, spicy, almost herbal hops, nice bitterness in the finish. Mouthfeel is typical IPA, well carbonated, light to medium bodied, goes down quite easy. Overall, it’s a very, very good everyday IPA. If I didn’t already have, like, 7 alternatives, it would be something I came back to regularly. B+

Now I just have to brave the inevitable shitshow once On the Wings of Armageddon makes its way up here. From what I’ve heard, it’s well worth the hassle. Let’s hope I’m equal to the challenge (it’s apparently already shown up on tap in the city and it appears to be a semi-regular limited release beer, so it will hopefully not be too difficult to secure some).