I’ve generally enjoyed 2SP’s offerings, but their limited bottlings have been a bit less consistent for me. This is partly due to style choices that just didn’t quite align with my general preferences. Hardly a crime and it’s been amply established that I’m the worst, so I’ve been lagging behind on their releases. Enter these two bottles, much more to my taste.

The first is an English Strong Ale aged in rum barrels for 12 months. This is the longest they’ve managed to barrel age a beer to date, and it sounds delicious. The second is a bourbon barrel aged imperial porter. Aged for 10 months in Jack Daniels, Jim Beam, and apparently a single barrel 1792 bourbon barrel that originated from local Kaedrin favorite Teresa’s Cafe (I’ve never gotten the 1792, but I’ve had some of their other single barrel picks and they’ve been good!) These both sound delicious, lets dig in: 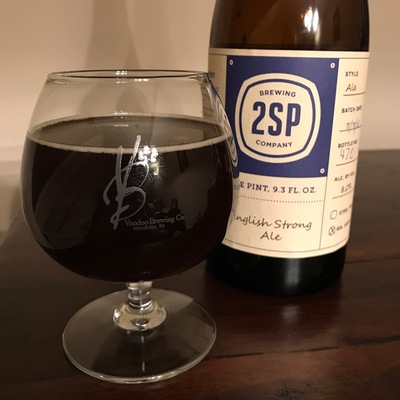 2SP Rummy Sticks (Rum Barrel Aged English Strong Ale) – Pours a very dark amber brown color with a quarter finger of fizzy head that quickly resolves to a ring around the edge which manages to stick around a bit longer. Smells of… banana? Definitely rum, oak, dark fruits, molasses, but yes, banana too, interesting. Taste is a little less complex than the nose would have you believe, but it hits similar notes, just not as hard. Sweet, dark fruit, rum, oak, molasses, and sure, banana, why not, maybe some noble hops going on too, not really bitter, but the finish balances out some of the upfront sweetness. A little more rummy booze shows up as it warms too. Mouthfeel is medium bodied, finely carbed, perhaps a bit too thin for a Rum barrel-aged approach, but it comports itself well. Overall, a definite improvement over recent bottles, but still not quite a home run… B+ 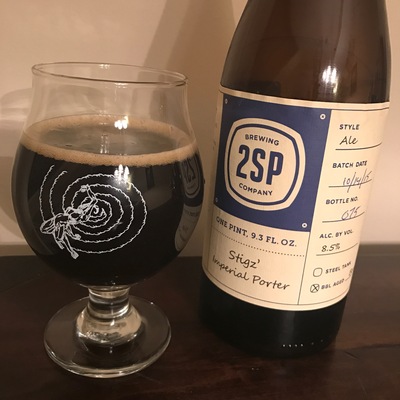 So these are definitely more to my taste than the past couple releases, but still haven’t quite breached that top tier. That being said, these are certainly good enough to continue hunting down…

Take a Belgian Style Tripel and pop it into Chardonnay barrels for 10 months. Sounds groovy, but to be honest, if it doesn’t also include Brett and/or souring bugs, this sort of thing hasn’t worked out spectacularly for me in the past. This is a matter of personal taste, not quality. Often well made beer, but not something that bowls me over. For instance, I wasn’t a huge fan of Victory’s White Monkey, but I know lots of folks who love it. I have a feeling my reaction to 2SP’s take on the style will fall into the same bucket. Well crafted and I enjoyed drinking it, but it never really wowed me or got me revved up… 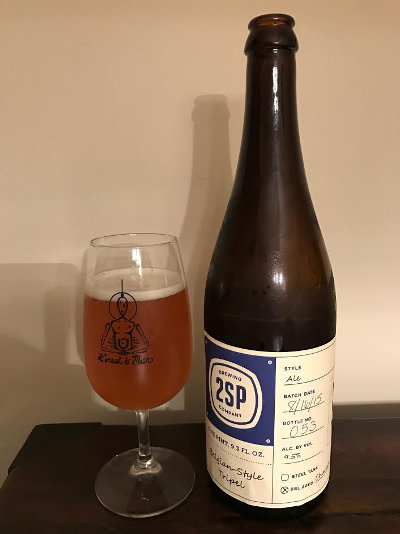 2SP Chardonnay Barrel Aged Belgian Style Tripel – Pours a warm orange gold color with afinger of slowly forming white head. Smells quite nice, lots of that white wine character, vinous fruit, expressive Belgian yeast, hints of spice. Taste starts off very sweet, we get that Chardonnay barrel character right away, fruity yeast with just a hint of spice, finishing with a little booze. Mouthfeel is medium bodied, moderately carbonated, with a bit of boozy heat. Overall, it’s a decent take on a non-funky barrel-aged tripel, not my favorite style in the world to be honest, but it’s getting the job done. B

I’ve generally enjoyed 2SP’s offerings and will continue to explore them. Nothing in the immediate pipeline, but I’m looking forward to the return of The Russian, and its bourbon barrel treatment as well (perhaps the next bottle won’t be overcarbed!)

Ah the Dark Saison, everyone’s favorite! By which I mean no one really likes or appreciates these things. They’re all liars. But they’ve got good taste and that’s got to count for something, right? The answer is no.

In all seriousness, this is not the most common style, and even the really good ones we do get tend to be more American Wild Ales than saisons… but now we’re just splitting hairs. The truth is that it’s difficult to really nail this sort of thing, a dark saison aged in American Oak barrels, and I’ve only had a couple that I’ve really enjoyed. That being said, I’m always looking for a beer to turn me around on an underwhelming style. It’s happened many times before, did 2SP manage it with this entry? Alas, the answer is again: no. It’s perfectly cromulent, to be sure, but not something that will change hearts and minds: 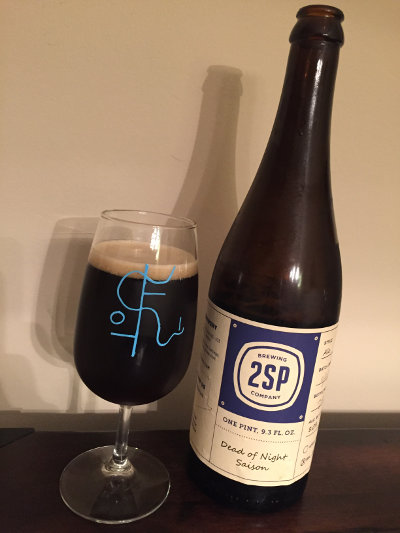 2SP Barrel-Aged Dead of Night Saison – Pours a very dark brown color with hints of amber when held in light, a finger of very light tan head. Smells of dark chocolate, hints of that musty saison base, and a little tart funk peeking through. Taste has a nice richness to it, some chocolate, some saison spice, a very light funky tartness, and a slightly discordant boozy note. It never quite reaches that chocolate covered fruit character that the best entries in the style have. Mouthfeel is medium bodied, decent carbonation, a little boozy. Overall, this is interesting and cromulent enough, but I’m not sure it’s entirely baked. B-

I’ve really enjoyed a lot of 2SP’s beers, but for some reason the two barrel-aged entries have underwhelmed. It still feels like there’s a lot of potential here though, so I will most certainly be trying some more…

Delaware County is a weird place. I say this as a man born and raised there. Blue collar with lots of Irish Catholics (I wen’t to St. Dot’s and Cardinal O’Hara). I’m surprised there’s not a Delco flag. It’s weird for a place to choose its identity based on its county, but Delco is a way of life. Apparently. Alright, fine, I’m exaggerating for effect here, but there is something a little… off about Delco. The point is, when a brewery opens up there, you can expect them to embrace their roots and take pride in their county. Whatever that may be.

2SP is the recently opened (er, last year) brewery arm of Two Stones Pub, a small chain of solid little beer bars located mostly in Delaware. Head brewer and Delco’s native son Bob Barrar made a name for himself brewing for Iron Hill Brewpub in Media, earning numerous medals at GABF and other big contests. One of his most famous creations is Iron Hill’s Russian Imperial Stout, a beer that he’s adapted for new life at 2SP. As local imperial stouts go, it’s great and I look forward to seeing it around more often. Now they’ve put it in Bourbon Barrels and aged it for 8 months? Sold, even if it is a pricey bottle. I’ve often mentioned the need for a more regularly available local BBA stout; will this beer fill that need? Well, maybe? 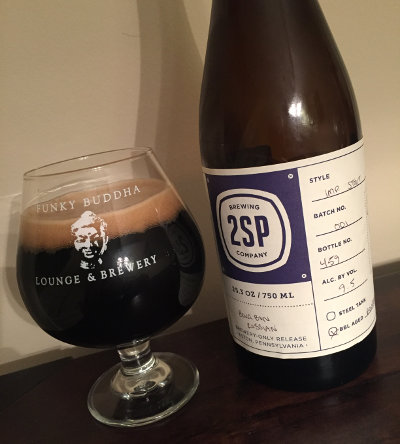 2SP Bourbon Barrel Aged The Russian – Pours a deep, dark brown color, almost black, with a solid finger of light brown head that sticks around for a bit. Smells of molasses, caramel, vanilla, with hints of the bourbon and oak pitching in as well. Roast comes out a bit more in the taste, along with similar elements from the nose, light caramel and vanilla, with just a bit of vanilla and oak. Mouthfeel is medium to full bodied, well carbonated (moreso than typical for the style – not inappropriate, but it does lighten this beer up a bit more than it probably should), a nice sipper. Overall, it’s solid, but not a top tier affair. Honestly, I might like the regular The Russian better… B+

I’ve generally enjoyed everything I’ve had from 2SP, so I’m looking forward to keeping tabs on them in the coming years. As for a world class local BBA stout? This isn’t quite there yet, but we’ve got another candidate coming soon. Stay tuned.