After three weeks of glorious fermentation, I transferred Barlennan, my homebrewed Scotch Ale/Wee Heavy, to two secondary fermenters. Fermentation appeared to be vigorous and healthy, like a conquistador who drank from the fountain of youth (sorry, I read a silly thriller whilst cooped up in lockdown and I’m a little loopy right now). After an intense battery of tests and measurements, my initial readings were pleasantly surprising in that I achieved a pretty high attenuation ferment. Of course, by “intense battery of tests” I mean that I splashed some beer on my refractometer and quickly eyeballed the measurement, a process that is far from rigorous and has undoubtedly yielded wildly inaccurate results. I’m the worst! 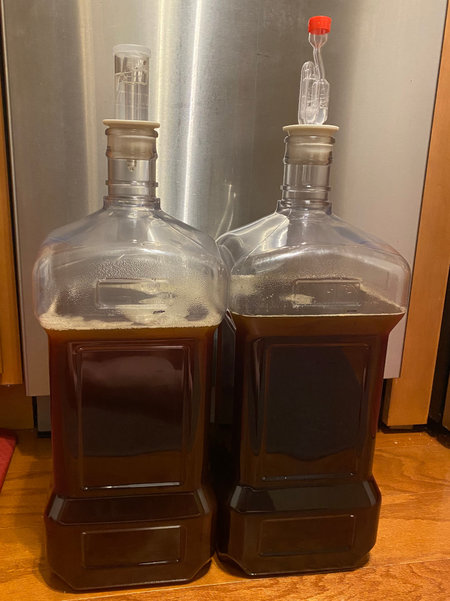 Final gravity was approximately 12.1 Brix, which roughly translates to 1.022. Given the OG of 1.096, this leaves us with 76% attenuation and about 9.6% ABV. This is well over the normal range for the Wyeast 1728 Scottish Ale yeast (which is 69% – 73%), but I’m wondering if the relatively high ambient temperatures kept the fermentation going stronger than I usually maintain (I typically don’t brew during the warmer months due to temperature control issues, but this seemed to work out fine). The beer certainly smelled great, tons of rich, caramelized malt and a very nice fruity note that comes across well. Supposedly higher fermentation temps result in more esters from the yeast, which could be part of that fruity character.

I mentioned before that I’d been soaking the oak cubes in Aberlour A’Bunadh for about three years or so. The resulting scotch wasn’t particularly great (it had a sorta grainy, bitter astringency, and it tasted like burning), so I dumped it (sad!) and got myself a fresh bottle of Aberlour 16 and did a quick rinse of the cubes with a small amount of scotch (about 60 ml). I went with Aberlour for a couple of reasons. One, it’s not an Islay Scotch, so no one will be wondering who put their cigar out in my beer. And two, it’s at least partially finished in sherry barrels, which I think could be a harmonious combination of flavors.

While transferring the beer to secondary, I split the batch into two, one getting the oak cubes (and I dumped the 60ml of scotch in there while I was at it – no sense wasting that precious, pricey juice) and the other I left alone. As with previous oak aged experiments, I plan to let this one sit 3-4 weeks and bottle some of the regular, some of the oak-aged, and some of a blend of the two. I may also court perilous levels of extremity by making up a few bottles of fortified beer, adding some Scotch until a given bottle reaches some ridiculous ABV. Or maybe I’ll dump a bunch into a keg and see what happens. Time and assorted levels of laziness will tell.

As an aside, have I mentioned how much the PLCB sucks? Since Covid-19, all of the liquor stores in Pennsylvania have been closed. Over the last month or so, they’ve slowly been reopening for curbside pickup (and now, I believe, they’re starting to actually open up stores again). I gave it a shot, but I called a couple of local stores approximately 20 times over the course of a few days and always got a busy signal. Instead of continuing with that mess, I just went to TotalWine in Delaware and grabbed a bottle (for what I assume is a cheaper price than PA would have). I think I’m done with the PA state stores. Anywho, I’ll check back in in a few weeks when it’s time to bottle (or maybe Keg)