According to my voluminous records, it’s been over two years since my last batch of homebrew, so I’ve officially lost any and all superpowers conferred by the home brewing fraternity of zythophilia. I could list out some excuses, but it ultimately comes down to having an excess buildup of world class beer in my house already. Alright, fine, I should probably just admit that it’s sheer laziness, but I do, in fact, have a lot of beer in my house.

Anywho, now that I’m in lockdown, I thought it might be a good time to reignite that homebrewing flame and make the Scotch Ale I’ve been threatening to brew for nigh on 4 years now. It will join Trystero and Bomb & Grapnel in my little series of oak-aged homebrew experiments (using a similar process that will result in some base beer, an oaked version, and a blend). Let’s get into it: 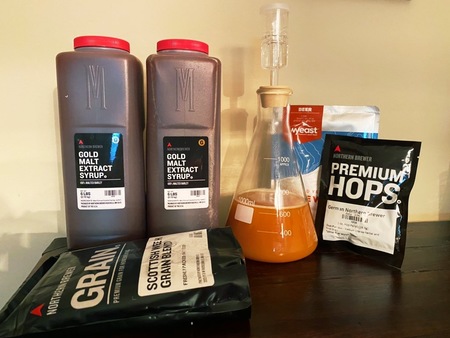 I originally wanted to do an even simpler recipe, but my preferred homebrew shop is far away and their Scotch Ale kit had peated malt in it (this isn’t an actual historical thing, but for some reason a lot of recipes call for it), so I just ordered this Northern Brewer kit that seemed pretty close to what I was going to do anyway. My initial version had a little less in the way of specialty malts, but the kit is still pretty simple stuff. Mostly just a base malt with some specialty grains for flavor, a single hop addition for bitterness (historically, Scottish ales are not known for pronounced hop character owing to the fact that they had to import their hops from *groan* England). Simple ingredients, but I’m going to do some decidedly non-simple stuff for the rest of the process.

It’s a high-ish gravity brew, so I did a yeast starter using some old Bavarian Wheat DME that I had laying around (this is not what I mean when I say non-simple – I just should mention it). It had solidified into a brick, so I had to soak it in some warm water first to dissolve it, but the general yeast starter recipe (3 parts water, 1 part malt) worked well enough, and resulted in a reasonable 600ish ml starter. The Northern Brewer kit came with two Wyeast smack packs, so I used one for the starter, and just saved the other to pitch at the same time as the starter. I did the starter on Saturday and brew day was on Tuesday (probably should have been Monday, but no big whoop). 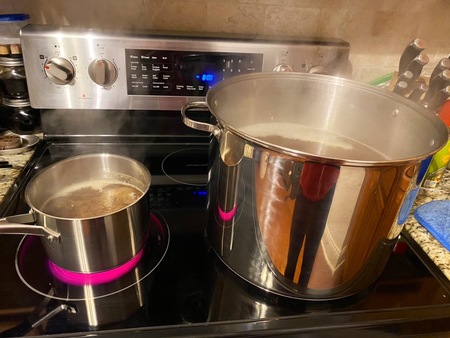 The only real deviation from standard brewing practices here is that I followed the apparently infamous skotrat technique that he developed for a Traquair House Ale Clone (incidentally, that’s probably my favorite Scotch Ale that’s actually from Scotland that I’ve had). Basically, the technique has you removing a small portion of the wort and giving it a really hard boil to caramelize it. He says to reduce two gallons down to a pint, but that recipe is for a much larger batch. Also, my readily available cookware for this is limited and I didn’t feel like spelunking through my basement to find something bigger, so my portion was more like 1.5 quarts reduced down to about a cup (maybe a cup and a half, I didn’t measure it). It was noticeably darker than the base brew, so hopefully it got some good caramelization on it that will come through in the finished product. Honestly, this might be something I want to do for all of my high gravity stuff, but let’s not get too far ahead of ourselves.

As mentioned above, after about two weeks or so, I’ll rack to secondary, splitting the batch into two 2.5 Gallon fermenters, one of which will get oak cubes that have been soaking in Aberlour for about 3 years (remember when I said I’ve been planning this beer for four years?) At bottling time, I’m going to split this up into three different bottlings. One with the base, one with the oaked version, and one with a blend of the two. Depending on how I feel, I may also do something like a fortified beer, adding enough Scotch to a couple bottles to bring the ABV up to about 20% ABV.

Hopefully, all these little tweaks to the process will make up for my continued engagement with extract brewing.

This is a little higher than the original target OG of around 1.083, but I’m fine with the higher gravity because I want this to be a big, chewy, oak aged monster of a beer. That said, assuming something like 70% attenuation, I’ll get about 9% ABV out of this (FG of around 1.027), which should be a good base for the oak aging. One concern with the fermentation right now is that the ambient temps in my house are hovering around 70° F, which is pretty much the max temp for this yeast. Fortunately, we’re having a cool spring, so I should be able to keep it slightly lower for these critical first few days (update: I’ve been able to maintain an average of 69° during the most active periods of fermentation – nice.)

As for the name of the beer, in accordance with my other high gravity brews, I’ve selected an appropriately nerdy (and obscure) reference from science fiction literature: Barlennan. If you already know what I’m talking about, we are probably kindred spirits of some kind. If not, well, it’s from a 1954 Hal Clement novel called Mission of Gravity. That review was from almost exactly three years ago, and when that character’s name showed up in that book I thought it would be an exceptional name for a beer, mostly just because “Barl” is also the base for barley, but also the notion of “high gravity” fits with the events of the book (I suppose we’re talking about different concepts, but still). I’m glad I’m finally able to make this beer. Hopefully it will live up to the years of hype. It’s bubbling away happily right now, so we’re certainly on-track… stay tuned!