There’s a whiskey nerd concept that’s been popularized over the last decade or so called the “Infinity Bottle” (also known as “Solera Bottle” or perhaps “Living Bottle”). The idea is that instead of finishing off the last couple of pours from a whiskey bottle, you pour several different whiskeys together into your own Voltron-esque proprietary blend. It thus becomes something like a document of your whiskey drinking history. It’s unique to your tastes and purchases and most importantly, it never ends. Plus, as you add new components, it’s always changing… but only fractionally. Some of the people who’ve been starting these bottles envision it as becoming a family heirloom, passed down across generations. In thousands of years, mechanocyte-based metahuman successor life forms will probably still be aging distilled hooch in oak barrels on Omicron Persei 8 and blending the remnants into the same infinity bottles their puny, flesh-based ancestors started.

Um, anyway, as a puny, flesh-based beer nerd whose eyes are bigger than his liver, I tend to amass whiskey bottles because it basically takes forever to drink through one. I like whiskey, but I don’t drink it every day or even every week, so those bottles tend to linger on my shelves for a while. As such, when this concept appeared on my radar a few years ago, I thought it was a neat opportunity to clear out my booze shelf and put together my first iteration of an infinity bottle.

Naturally, I made a spreadsheet of all the components (it’s on Google Sheets and publicly viewable if you’re interested). The first iteration was pretty heavy on barrel strength bruisers and Four Roses single barrel picks (no slouches themselves on the ABV front). There were 5 components to that first blend, and 4 were bottles I finished off completely (the only remaining bottle was the TalkBeer Four Roses pick, which I finished not long after that first blending session). This was back in 2017, and since then I’ve drank a little less than half of the bottle (as I said, I tend to go through whiskey slowly). 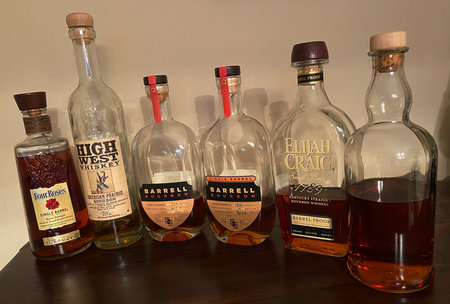 Not to give it away, but that first batch was a little on the “hot” side and while age is often overemphasized, I think it could have used some more age. Last week, I added 5 more components to the blend and… only managed to make small improvements to the ABV and age. The new components were once again pretty heavy on the barrel strength picks, including moar Four Roses, a couple of Barrell bourbons, Elijah Craig Barrel Proof, and High West American Prairie Bourbon (the age of which is vaguely mysterious, though it sez it’s a “blend of whiskeys aged 2-13 years”, so I just entered it as 5 years old in my spreadsheet. So that didn’t help with my age issue, but on the other hand, it was the lowest ABV component ever added, by far, so while there’s not a lot of this in the mix, it’s a welcome addition). 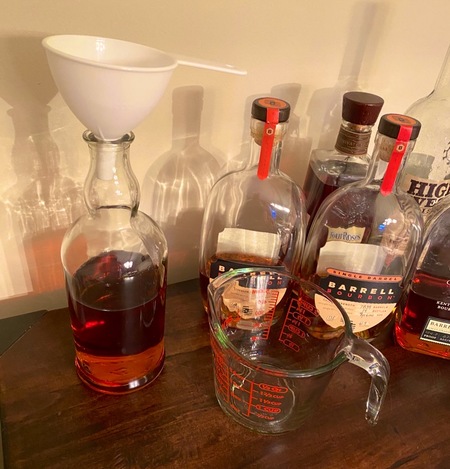 This has obviously been an interesting experience and will only get moreso over time. Some additional, assorted thoughts in no particular order:

Alrighty, let’s get into these suckers. Thoughts on both batches below:

Infinity Bottle V1 – Pours your standard golden orange bourbon color. Smells nice, some spice, oak, caramel, and boozy af, maybe a hint of fusel character, singing nose hairs a bit, y’know. Taste follows the nose, pretty standard high-test bourbon, a dusting of spice, oak, caramel, and tons of alcohol. As I drink, it opens up a bit more, and that Four Roses bubblegum character peeks through, as well as a very nice cinnamon note. Mouthfeel is hot and boozy, not great to my baby beer palate, but not as bruising as some of the components by themselves. Adding water helps open it up a bit, tamps down the hot booze, and some of the other flavors present themselves.

Overall, this is pretty good stuff, actually, but it’s a little too boozy and “hot” (and maybe some higher aged components could help with this). What this needs is a heaping helping of Orphan Barrel juice, which, alas we no longer have at Kaedrin HQ (and more recent releases are priced pretty rough). In theory, the Pappy 23 would work wonders here, but I suspect we’ll only be putting minimal Pappy juice in this here infinity bottle (now, the Lot “B” on the other hand…). 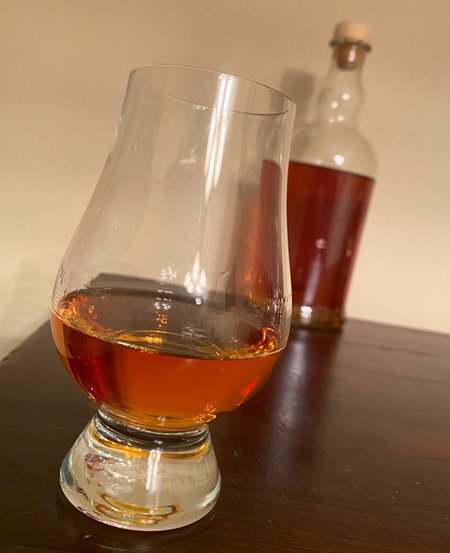 Infinity Bottle V2 – Minor improvements to age and ABV, but not quite enough of what this bottle actually needs. We’re certainly moving in the right direction, and we can try to gear future purchases towards high age/low abv offerings, I guess. That being said, this V2 represents a notable improvement over V1. Not sure if that’s just the “livening up” effect of adding new components, or if the composition of the components really did bring about significant change (probably both!) As mentioned above, I feel like I can definitely detect the impact of the Barrell bourbons, which have a distinct, dusty, minerally character (apparently old Dickel) and plenty of oak. Speaking of which, the Elijah Craig may also contribute to that oakiness. It’s still a little hot, but not as rough as the first batch, so we’re definitely making progress. I can’t wait to see how this will progress.

Beer Nerd Musings: So beer rather famously doesn’t age well and once you’ve opened a bottle, forget about it. The concept of an “infinity beer bottle”, as practiced here, would never work. That being said, blending of barrel aged beers is most certainly a thing. Gueuzes are blends of 3, 2, and 1 year old lambic. The Bruery’s Anniversary Beers actually utilize a Solera-like process, blending some of each batch into the next batch (and they’re going on a dozen years of doing so). That’s kinda infinity-like, though who knows how long they’ll manage. Blending a bunch of different beers/barrels can have mixed results. Firestone Walker’s Anniversary series has been pretty fantastic over the years. A recent blend of a wide variety of Medianoche barrel aged variants was fine, but nowhere near as good as much simpler treatments of their base beer. But I’m mostly digressing at this point. Brewers can do some interesting stuff with blending different offerings, but consumers who buy too much beer have limited options. During a share a while back, some friends and I created a sublime blend of 4 different sour beers, which we dubbed the Thirsty Camel Cuvée. It was one of those revelatory more-than-the-sum-of-its-parts experiences that, sadly, will probably never exist again. At least two of the components were one-off brews, and the very nature of barrel-aged sour ales doesn’t generally lend itself to consistency, so… yeah, that’s a blend that existed for about 20 minutes and probably couldn’t be made again if we tried.

We’re in the homestretch of the annual quasi-hiatus from beer, so maybe one more non-beer post, then we return to beer (which, to be sure, I still have a backlog of reviews for).

Update: Forgot to mention which bottle I was using for this little project, so I added that above…