Pelican Pub and Brewery’s Mother of All Storms is a stalwart classic of barrel-aged barleywine. Not the first, but among the better examples out there, it began its life as Stormwatcher’s Winterfest. The initial incarnations of the barrel aged version of same were dubbed Perfect Storm, but after a couple of years, this was changed to Mother of All Storms. In accordance with the Kaedrin tradition of completely unwarranted and unsubstantiated explanations for such changes, I suspect this has to do with some sort of legal snafu involving the popular book/film, The Perfect Storm. Rather than risk the wrath of George Clooney and Sebastian Junger (as they were obviously angered by a Northwestern brewery appropriating the tale of a tragic Nor’easter) Pelican caved and decided to change the name. As per usual, it’s what’s in the bottle that counts, so let’s hoist a glass in honor of the Andrea Gail: 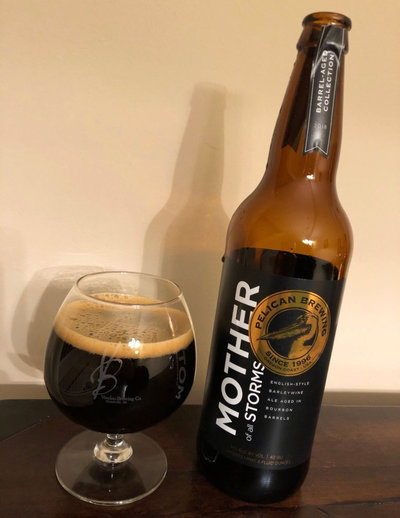 Pelican Mother of All Storms – Pours a deep, dark brown color with a half finger of light tan head. Smells of rich caramel, candied dark fruit, boozy bourbon, oak, and vanilla, with some hops lurking in the undertow maybe? Taste is rich caramel, molasses, brown sugar, candied dark fruit, raisins, plums, and lots of that boozy bourbon, oak, and vanilla, finishing with a light bitterness. Bottle sez it’s an English Barleywine, but I get some of that vaunted American Barleywine hoppy dankness in the taste as well. Mouthfeel is rich and full bodied, well carbed, plenty of boozy heat. Overall, yup, awesome. A-

Yeah, I’m still catching up with some old reviews. Pelican seems like a neat brewery (located right on the coast, it seems like an absurdly photogenic brewery location), and they’ve built on the success of MoAS with additional barrel aged beers like Father of All Tsunamis (a BBA stout), amongst others, which I obviously need to catch up with someday.