Free Will makes what is probably the best local barrel-aged stout, dubbed Ralphius. To be sure, there are plenty of one-offs that could contend (both Levante and Tired Hands could compete in this arena) and if you widen the “local” area, others will put up a good fight (or, uh, dominate). 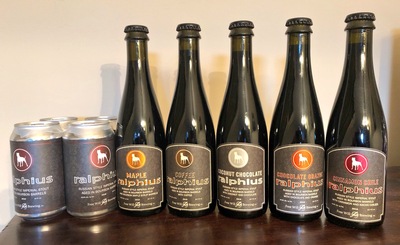 This year, Free Will has decided to expand their program with variants, which is what we’ll cover today. Released in a low-pressure Black Friday event, they’re clearly providing an independent, local alternative to Bourbon County and associated variants. As per usual, this sort of stout variant game represents nice changes of pace, but mostly I come back to the idea of straight bourbon barrel aged stouts, and regular ol’ Ralphius is probably still my favorite. Because I’m boring? Sure, let’s go with that. Now that I’ve killed all the momentum and suspense, let’s take a look at these variants…. 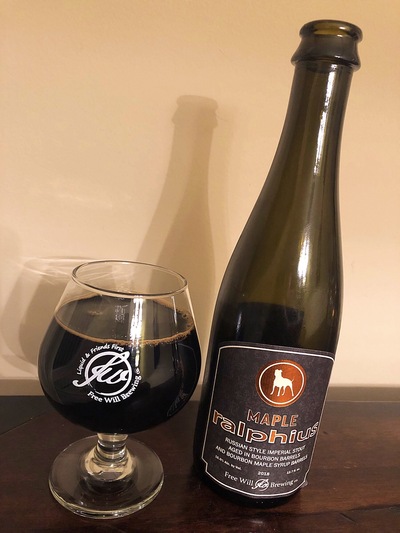 Free Will Maple Ralphius – Aged in Bourbon and Bourbon Maple Barrels – Pours a deep black color with only a crown of brown head. Smells of rich caramel, a hint of chocolate and roast, with some brown sugar, bourbon, oak, and vanilla, only a little of that maple barrel. Taste is rich and sweet, caramel, a touch of maple syrup, hints of underlying roast, and plenty of bourbon, oak, and vanilla. Mouthfeel is full bodied, rich, and chewy, lightly but well carbonated, some pleasant boozy heat. Overall, it’s a great little variant, maple is present but not overpowering or cloying, I probably should have bought more of these. A-

Free Will Coconut Chocolate Ralphius – Aged with, you guessed it, coconut and chocolate – Pours deep black with a bit more head, half a finger that quickly resolves to the crown. Smells… a lot like regular Ralphius, some roast, caramel, and lots of bourbon, oak, and vanilla. As it warms and if I do the olephactory equivalent of squinting, I get some coconut. Taste is again pretty light on the coconut, but it’s there, but the Ralphius base is its standard self. I guess chocolate is there too, but it doesn’t really stand out. Mouthfeel is on point as well. Overall, a good beer, a bit light on the Coconut, but the Ralphius base keeps it going. Not especially sure how to rate this, as it’s probably an A- due to the strength of the base, but if you’re looking for a Coconut stout, this might not fully scratch that itch, making it more of a B+. I never managed to snag the Iron Abbey Collaboration that Free Will made last year, which sounded an awful lot like this variant of Ralphius, so I can’t really make the comparison, though I’d like to try sometime!

Free Will Chocolate Orange Ralphius – Aged with, big shocker, chocolate and orange – Pours that same deep black with a cap of brown head that quickly resolves to a ring around the edge. Smells similar to the standard Ralphius profile, but the orange and chocolate do pop, especially as it warms. Taste is sweet, lots of that base Ralphius character, but the citrus and chocolate do make an impression. Mouthfeel is par for the course. Overall, a good beer, a nice variant, but original Ralphius still rules. This is perhaps more subtle than the BCBS take on same, for what that’s worth. And I’m not really sure what that’s worth. Is it worth having a variant if the added flavor doesn’t come through too strong? B+

Free Will Cinnamon Chile Ralphius – Aged with cinnamon and ancho chilies – Yeah, looks the same, almost no head this time. Smells heavily of cinnamon, a little chile too and hints of the usual Ralphius base, but the cinnamon is dominant here. Taste features more of the Ralphius base than the nose would have you believe, but the cinnamon is still powerful with a lighter touch on the chile, though you get a teensy bit of lingering spicy heat in the finish (nothing untoward though, and the cinnamon is still front and center). Mouthfeel is the usual full bodied stuff, a little spicy heat from the chile that lingers a bit, but again, it’s a light touch that adds complexity, rather than overwhelm. The cinnamon, on the otherhand, almost feels like it’s adding something to the mouthfeel. Grainy? Chalky? Not sure how to describe it, but the cinnamon is not just tasted, but felt. Overall, way more heavy handed than any of the variants, especially when it comes to the cinnamon, which is prevalent despite the strength of the base, which is the only thing keeping it remotely in check. I happen to like cinnamon, but this is perhaps a bit much. I’m enjoying it, but I could see it being a turnoff to some. I’m finding it to be a nice accompaniment to the holiday season though. B 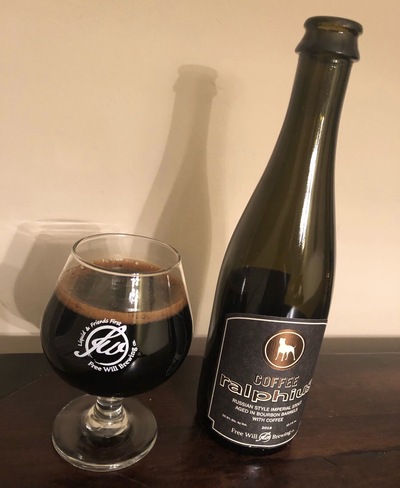 Free Will Coffee Ralphius – Yes, the dreaded coffee (apparently from local Speakeasy Coffee Company) – Same general appearance, a nose with lots of coffee and a little of that base caramel, bourbon, oak, and vanilla. Taste has that standard Ralphius character with a prominent coffee bite coming in the middle and lingering through the finish. Mouthfeel is full bodied, rich, and chewy, a little boozy heat. Overall, it’s a well balanced bba coffee stout, very well done. If you’re missing BCBCS this year, this one should tide you over. Even my coffee ambivalence can sometimes be conquered. This is the highest rated of all the Ralphius entries this year, and I can see why, even if my general taste still prefers regular. A-

Pretty sure the beer nerd details are, er, estimated, since they’re all identical (except for when I drank it, which is precise and accurate), but you get the picture.