A solid decade of beer obsession has weakened certain of my more frugal impulses, sometimes to the extreme level of buying beers like Baladin’s line of still barleywines like Xyauyù. It’ll put a hurting on your wallet for sure, but I must say, there’s nothing else quite like it.

Baladin’s Matterino “Teo” Musso is one of the folks leading the charge in Italian beer, and likes to experiment with beers like this, which he calls a “sofa beer”, presumably because he used real sofas in making the beer (or just, like, sitting on a couch and sipping this is cool. What I’m saying is that sofas are either an ingredient in the beer or a place where you’d want sit whilst consuming. One of those two things.)

This is a barleywine (#BiL) that has been exposed to air in order to kick off an intentional bout of oxidation, then aged for 2.5 to 3.5 years before release. It’s bottled without carbonation and comes completely still. The whole process is tremendously unusual for beer, but has an air of dessert wines like an old tawny port or sipping sherry. I suppose some barleywines actually live up to their name. There’s a whole bunch of variants, including ones aged in differing barrels and tea or tobacco or other wacky ingredients, but to my mind, the regular ol’ gold label is pretty spectacular by itself.

I realize that most people won’t pony up $45-$50 for a single 500 ml bottle of beer, but I will say that this pricing does put it in the company of well aged port, sherry, and madeira wines, which aren’t exactly cheap (and are often significantly more expensive). Not an everyday beer in any sense, but as a rare splurge, I think it’s worth the stretch and would fit a digestif role fantastically. After all, Barleywine is Life, and it doesn’t get much more lifelike than this: 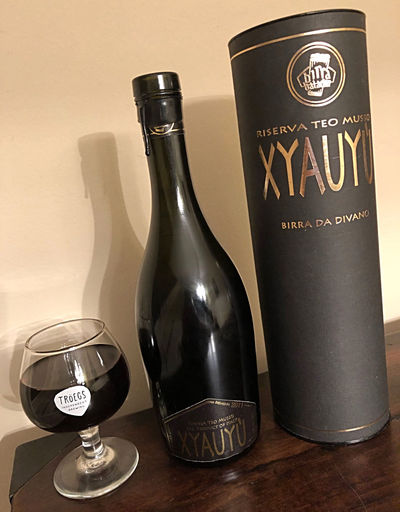 Baladin Xyauyù Etichetta Oro (Gold Label) 2011 – Pours a clear, dark amber color, almost brown, no head whatsoever, flat as a board. Smells wonderful, raisins, figs, rich caramel, toffee, molasses, some nutty aromas, an intense nose. Taste hits those rich caramel notes, toffee, molasses dark candied fruits, dried plums, raisins, figs, a nice nutty character, some oxidation showing but in the best way possible, and a heaping helping of booze. Mouthfeel is completely still, flat, but still rich and full bodied, not quite syrupy, with a pleasant boozy heat. I used to be bothered by low carbed beers, but somehow it doesn’t bother me here at all, and indeed, I can’t imagine this having the same impact otherwise (not sure if this just means I’ve gotten over a carb sensitivity issue or if it’s just this one beer that works). Overall, this is some spectacular stuff, though rating something so unique is a bit of a challenge. I’ll call it an A-, but still recommend the experience if you’ve got the stomach for spending that much (some places will do a thing where they pour you a 3-5 ounce glass, which won’t be particularly cheap, but definitely more manageable than a whole bottle. This was how I got my first taste of this years ago – it blew me away and made the decision to bypass frugality and purchase a bottle much easier.)

As mentioned above, there are variants, though I’ve only ever seen one or two. That being said, I may pull the trigger on one of those someday, though probably not anytime soon. That being said, I have another beer review coming for something uniquely pricey and boozy, so stay tuned.