I drank this on Friday, April 13th, so yes, I’m far behind on reviews here. A thousand pardons. That date being what it is, I decided to have a little movie marathon and broke out my 8 movie set of Friday the 13th films. Yes, I still use physical media from time to time, wanna fight about it? Also, yes, for some reason I love the Friday the 13th series of films, such that I’m probably going to spend a lot more time writing about them in this post than the beer in question. We can fight about that too, if you like.

So I started off with the original Friday the 13th. Made in 1980, it’s not an ur example of the slasher genre or anything, but it may be a codifier of a few conventions. In other words, it’s derivative as all get out, but it solidified the template that many of the trashier examples of the genre follow. There’s not much in this movie that was not done earlier and better by the likes of Black Christmas or Halloween, but this shows how lesser filmmakers imitate greatness. Some elements are still great. Tom Savini’s makeup and effects are a step up from earlier examples, even when they’re lifting gags wholesale from obscure proto-slashers like Bay of Blood. The ending is also a notable example of a broader horror movie trope (I won’t spoil it here, but it’s a good one, despite the implication that it’s a dream sequence? Whatever, it works.) It suffers a bit in my mind for the lack of Jason, though it’s also interesting in that respect. It was fun revisiting this, but it’s not the one I usually reach to rewatch.

Next up was Friday the 13th Part 2. Made on the cheap just a year later, this one features Jason for the first time, though he’s still in backwoods overalls and with a bag over his head (which again, are elements stolen from earlier films like The Town That Dreaded Sundown, etc…) Again, decent makeup and effects work here, and the film is still aping Bay of Blood for its kills, but the real standout of the film is Ginny (played by Amy Steel), arguably the best final girl of all time. She fights Jason with a kick to the nards, a machete, a pitchfork, a chainsaw, and of course, a cable knit sweater (or, like, her wits, whatever). She also subverts a lot of the supposed final girl conventions, which are generally overstated to make a case that slashers are conservative morality plays (which they can be, but aren’t always). Anyway, the film is a bit marred by Steve Miner’s unimaginative direction and the nonsensical ending, but it’s still a fun little flick. 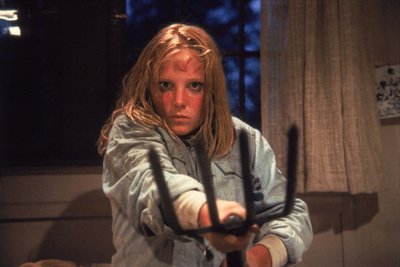 Realizing that I probably wouldn’t get through all of the series in one night, I then skipped ahead to Friday the 13th: A New Beginning, the much maligned fifth installment of the series. While certainly not one of the best of the series (a distinction that belongs to Parts IV and VI), I do think it’s a bit underrated. It’s got a neat-ish idea. Since Jason was “killed” in part IV, they decide to follow the little boy who killed him. Now grown up, he’s haunted by visions of Jason. Currently living in a halfway house with other troubled teens, people start dying, and it’s implied that Jason may be returning, perhaps as a copycat. Or something. It’s not a very well executed idea, but the movie still has some fun characters or moments here or there. I mean, come on, how can you not like Violet?

Well that’s probably way more about Friday the 13th movies than you wanted to know (and I’m betraying way too much about my knowledge of these movies), so let’s get to one of the beers drank whilst watching. Bottle Logic’s barrel aged beers are hyped and praised to the point where obtaining them tends to be rather difficult, but it’s not so bad for lesser efforts like this one, an Imperial Red Ale made with Cassia Bark (basically cinnamon), aged in Mitcher bourbon barrels, then finished on French oak. It’s all done in collaboration with Barks of Love, a dog rescue organization, so it’s for a good cause too. Red Rover, Red Rover, I call Jason over: 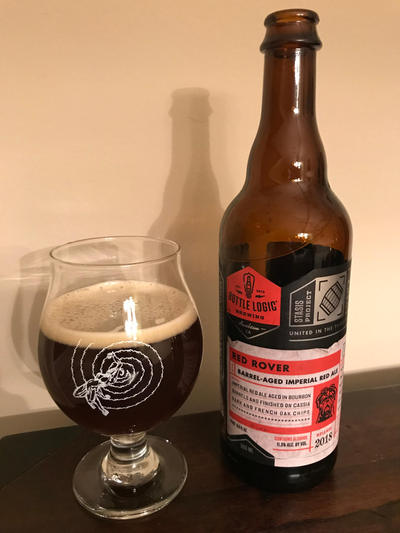 Bottle Logic Red Rover – Pours a dark amber brown color with a solid finger of dense, off-white head that leaves a bit of lacing as I drink. Smells very nice, a spicy, cinnamon-like character, floral and almost fruity aromas, woodsy, with a bit of boozy bourbon lurking around. Taste hits the same profile as the nose, sweet and spicy, cinnamon, a little fruit, rich toffee, some bourbon, oak, and vanilla. Mouthfeel is full bodied and rich, hints of spice and booze on the palate, but in a balanced way. Overall, tasty, complex, refined, and balanced stuff. A-