And now for something completely different. I know I’m supposed to be writing about this beer, but I’ve been doing this for almost 8 years at this point and thus getting a little repetitive. Please indulge me. Doubly so, because I’m going to talk about the (for some reason) much maligned Dean Koontz. For the uninitiated, he’s a very prolific horror/suspense author that is usually dismissed as a second-rate Stephen King.

To me, though, he’s an important author in that he’s the one that got me to start reading books. I wasn’t, like, illiterate or anything, but I mostly only read books when forced to for school, and Koontz got me reading for pleasure. No coercion necessary! Sure, his novels get repetitive, he has some specific bugaboos that he always focuses on (there’s a Scooby-esque satanic bad guy that seems supernatural but often isn’t and then a good guy with Police/SWAT/FBI/CIA/Army/Marine/etc… training takes him on and usually falls in love with a strong single mother with a precocious child and adorably intelligent dog along the way), and the stories can be repetitive, but they tend to be pretty interesting and a lot of fun. Movies based on his books have been almost uniformly bad, which might also be part of why his reputation suffers.

Unfortunately, his prolific output also means there’s a lot of stuff out there that isn’t quite as good as his best (to put it kindly), and from what I’ve read recently, he hasn’t really come close to the success he had in the 80s and 90s. Even given his tendency to repeat himself, when you’ve got about 100 books in print, it’s a little more difficult to find one that suits you, and people these days usually aren’t willing to give an author a second chance (a fair strategy for dealing with media overload, to be sure). For the record, I’d recommend checking out Lightning, Phantoms, Midnight, Strangers, or maybe: 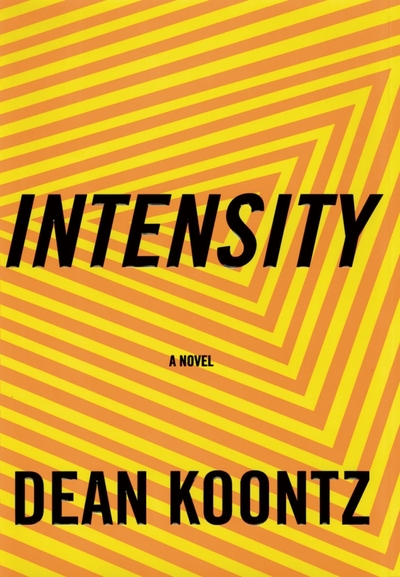 Pretty much the last great book of his that I remember reading was called Intensity. Granted, he didn’t use goofy capitalization to emphasize a brewery’s tenth anniversary (see? This post is coming together. Kinda.), but I have to admit that when I saw this bottle of beer, I immediately thought of Koontz’s novel. It was one of the flood of serial killer tales that besieged us in the mid 1990s, and to my mind, one of the better ones. A gruesome but well paced and compulsive read.

It’s been a solid twenty years since I’ve read it, but I still remember a lot of details, which isn’t something you expect from popular airport thrillers like this. Some of these details are trivial, like the killer’s choice of music for his cross country murder spree: Angelo Badalamenti (most famous as a film and TV composer for David Lynch, amongst others – and an odd choice to be employed like this). There’s this recurring bit with an albino deer that was mysterious but still evocative. There’s one decision from our protagonist that might be difficult to swallow, but once you get past that the book doesn’t really let up. It’s genuinely tense, and if I remember correctly, Koontz even sometimes reverts to present tense at times to emphasize the tension (a move that could be jarring and cheap, but which I remember working well). For once, Koontz’s obvious love of dogs is subverted by his use of them in a villainous fashion. The killer’s refusal to conform to textbook serial killer tropes (which was becoming a trope of itself at the time, to be sure) was effective, and there were some neat twists in that arena.

At this point, you’ve probably seen a dozen similar tales, so this might be old hat, but it was pretty great for teenaged me. There was a TV mini-series that was pretty much par for the course (not particularly worth seeking out, but not an abomination either), and it’s worth noting that the first half of High Tension is remarkably similar to the first half of Intensity, though the stories diverge considerably from there (even so, this might be the only real worthwhile Koontz adaptation, even though it’s not really acknowledged as such).

That a beer would remind me of a serial killer story is probably something best left unexplored, but since this is, in fact, a beer blog, let’s take a closer look at this beer brewed in honor of Hoppin’ Frog’s tenth anniversary. It’s a hoppy, American-style barleywine that was aged in bourbon barrels for six months, then dry hopped for some extra kick. Of course, this was released in 2016, so that fresh hop character has probably dissipated… or maybe not. Let’s drink it and find out: 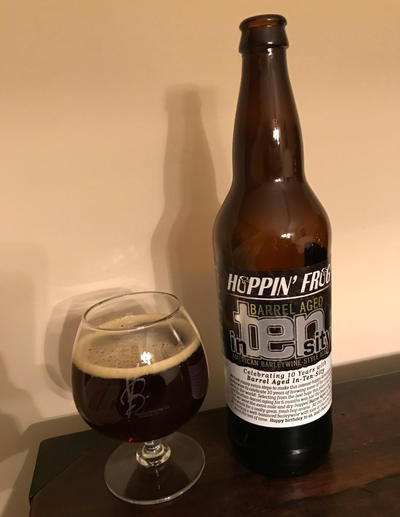 Hoppin’ Frog Barrel Aged InTENsity – Pours a clear, dark amber color with a half finger of off-white head. Smells of faded citrus hops, a little toffee, some boozy bourbon, oak, and vanilla edging in too. Taste starts off which rich caramel, crystal malt, and boozy bourbon, oak, and vanilla, the hops emerging more towards the finish, which also has a boozy little bite. Some mild oxidation here gives complexity without turning the whole thing into cardboard. Mouthfeel is full bodied and rich, moderate carbonation, some boozy heat too. Overall, it’s bit on the hoppy side, as American Barleywines tend to be, but it’s quite nice. B+

I’m not sure if Hoppin’ Frog still makes Naked Evil, but I remember that as being better than this one. Of course, that was like 5 years ago, and my memory of that is somehow not as distinct as my memory of Koontz’s book.