Back in the halcyon days of 2012, after many moons searching, I finally landed a bottle of Founders Kentucky Breakfast Stout. At the time, I naively referred to it as a whale, because for me, it kinda was. It was this mythical thing that I had never seen, but which people on teh internets kept gushing over. In time, I would come to learn of the absurdity of the white whale list, but 2012 was a different time.

Right around when I was snagging my first KBS, Founders decided to bottle their infamous Canadian Breakfast Stout (CBS), a legendary variant of KBS that used the same base (imperial stout brewed with chocolate and coffee), but aged in bourbon barrels that had also been used to age maple syrup. Up to that point, it was an annual favorite at their taproom, but didn’t receive much in the way of distribution. And of course, amateur beer hunter that I was at the time (and frankly, still am, at least compared to a lot of folks), I never even got close to a bottle. The next batch came a few years later; they didn’t bottle it, but did distribute a fair amount of kegs to the Philly environs. Alas, moron that I also am, I never got off my keister to get a taste (by that time, my thoughts on coffee dosed beers had calcified and I wasn’t really up for hunting down a beer I’m sure I’d enjoy, but which would fall somewhat short of my favorites). Finally, CBS in its most recent incarnation arrived on shelves and in taprooms around the area just a few weeks ago, and I managed to snag a couple of bottles with relative ease (even unexpectedly scoring a glass on draft a few days later). Then I got slammed by a head cold and ear infection, so the bottle sat sadly undrunk in my fridge for a while. On a chilly Festivus evening, I finally popped the cap on this sucker. What does five years of anticipation do for this? Well, it’s pretty much what I expected, but I do rather like it more than expected… 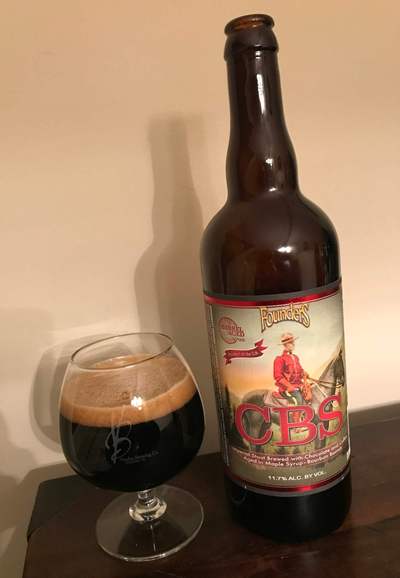 Founders Canadian Breakfast Stout (CBS) – Pours a deep, dark black color with a finger of light brown head. Smells of coffee, roast, a little of that syrup, and some bourbon, oak, and vanilla. Taste starts with rich caramel, that bourbon and oak character hits, followed by some roast and coffee, finishing on a brighter, sweeter syrupy note. The coffee character is clearly there, but takes a back seat to the barrel and syrup notes. As it warms, the coffee comes out a bit more, but so do the other elements. Much like KBS, this is a beer that I found decent at first sip, but which got better and better the more I drank. Mouthfeel is full bodied, rich, and chewy, faint hints of booze. Overall, a very nice, complex beer. My coffee ambivalence be damned, I like this a lot. A-

As per usual, Founders is always reliable, and stuff like this still manages to stand out, even as beer dorks are constantly zonked out on NEIPAs and pastry stouts.