Saint Archer was an independent San Diego brewery that opened in 2013, but then sold out to some sort of unholy agglomeration of Miller, Coors, and Molson in 2015 (those three macros have been circling each other for a while and while I think they’ve finally settled on their final form, I don’t think it’s worth going into too much detail. Suffice to say that they’re the number two brewing concern in the U.S. behind AB InBev.) It was one of the earlier sellouts, and of course the news was greeted with much consternation and gnashed teeth amongst the craft beer cognoscenti.

To my mind, whilst not a huge fan of massive corporations pushing around smaller breweries (which manifests in a variety of sneaky ways not worth enumerating at this point), I’m also not going to completely close myself off to the possibility of a beer from sellouts. For all the bluster and fury of the beer dorks, it’s not like people aren’t lining up for the likes of Bourbon County Brand Stout (made by notable sellout Goose Island) on Black Friday every year. What’s more, that beer is still phenomenal. And, you know, I like phenomenal beer. So will this Tusk & Grain (i.e. their series of oak aged offerings) beer justify shelling out shekels for a stealth-macro?

As the name implies, this is a blend of several barrel-aged components. Primarily a barleywine that spent two years in Woodford Reserve Bourbon barrels, with some two year old imperial stout and a one year old “export” stout blended in for complexity (exact proportions not specified). Apparently the big different between this second blend and the original blend is that the components are much older this time around. Sounds good to me. This approach calls to mind Firestone Walker’s Anniversary mega-blends, which frankly sets the bar pretty damned high. I don’t think they quite managed to clear that bar, but it’s an admirable attempt, and one that I’m glad I tried, macro-ownership issues be damned. 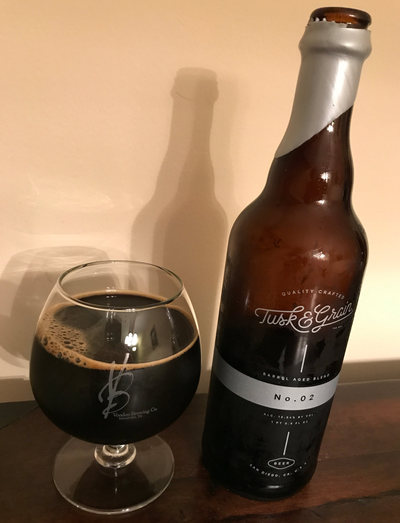 Saint Archer Tusk & Grain Barrel Aged Blend No. 02 – Pours a dark brown color with a cap of light brown head. Smells boozy, bourbon, oak, and vanilla, a little roast, a little caramel. Taste hits similar notes, more roast here than the nose, with a crystal malt note, moderately integrated barrel character, typical bourbon, oak, and vanilla notes. Mouthfeel is medium to full bodied, well carbonated, a little boozy. Overall, it’s a nice blend and worth the stretch, but it takes a clear backseat to the Firestone Anniversary blends. A high B+ (possibly an A- if I was feeling generous, but obviously I’m not right now…)

Jeeze, I don’t review anything for a couple weeks and my return review is a stinkin macro? A thousand pardons, I shall endeavor to do better. That said, this beer made a decent enough impression that I’d be curious to try some of their other offerings. So perhaps not a full thousand pardons. But a few, maybe? Something like that? Eh, let’s just drink a beer and leave it at that.