It’s been a little over a year and a half since the famed gypsy brewers of Pretty Things Beer & Ale Project decided to close up shop. Despite speculation, there was no official reason given for the closure other than their note that it was never meant to be a long term thing. As gypsy brewers, their very nature meant that their enterprise was lightweight and not tied down by things like debt, equipment, or real estate. I suspect they had their fill and decided to walk the Earth (you know, like Caine from Kung Fu) basically just because they could. And why not?

They were great brewers though, so it was still a sad thing. I thought I’d long since drank my last Pretty Things beer when I spied this bottle of barleywine at a random liquor store in Maryland. A decidedly English take on the style, this is meant as a tribute to barley (their hot take on American Barleywine: “…normally a sad beer indeed, lots of hops and alcohol but the star of the show is left scratching his chin in the eaves of the theatre.” Burn.) So I think its time to pay our finest regards to this sadly defunct brewery: 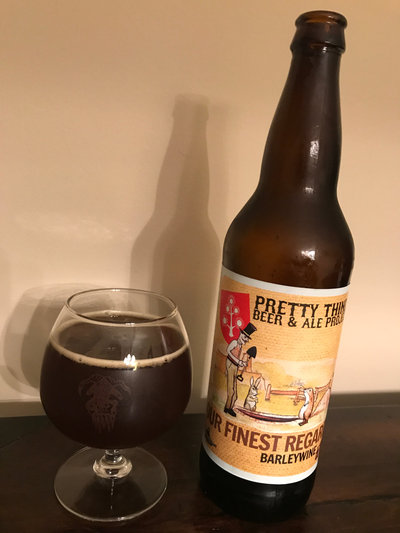 Pretty Things Our Finest Regards – Pours a cloudy dark brown color with a half-finger of off white head. Smells of rich crystal malt, a little nuttiness adding complexity along with hints of hops playing in the background. Taste has a nice caramel and toffee character with a distinct malty nuttiness finishing with a bit of dry booze. Mouthfeel is rich and medium-to-full bodied, perfectly carbonated, some pleasant booze. Overall, this is a great non-BA barleywine, one of the better that I’ve had. A-

Despite their closure, Pretty Things did put out a pale ale in the UK last year, so it’s possible we’ll see their return at some point. The nimble business model that allowed them to close neatly should also allow them to start up again if they so desire, but I suspect the best we’ll see are limited one-off type events like that pale ale… if that. Still, a beer dork can hope.