La Cabra continues to chug along, quickly establishing itself as a regular brewpub on the Kaedrin beat (a position all breweries aspire to, I assure you), and now, as if on cue, they’ve had their first bottle release. A nice online pre-sell made for a convenient and easy-going release day, no long lines of empty chairs or ridiculous waits here.

I originally thought this was names as some sort of beer pun, like ALE-atory (get it?), but it turns out that aleatory is a real, bona-fide word and everything. It means an object (or form of art) that relies on random elements or a roll of the dice during its production. In this case, we’ve got an American Wild Ale made with 500 pounds of raspberries that, if the name has any meaning, were probably lucked into at some point. It’s then aged in virgin oak for 4 months. While perhaps not the face melter that Brettophile was back in the day, this is a great little initial bottle release. 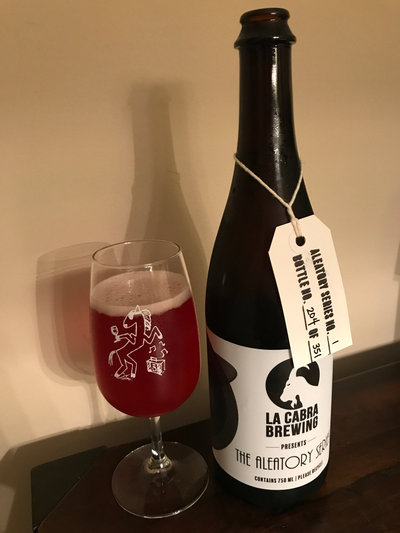 La Cabra Aleatory Series #1 – Pours a bright, almost luminous ruby red color with a finger of off white (maybe a little pink?) head. Smells nice, a hint of earthy funk, a kiss of oak, lots and lots of raspberries. Taste has a nice raspberry kick to it, tart but not super sour, again, not a lot of oak or funk here, but enough to balance things out. Mouthfeel is light to medium bodied, dry, low acidity. Overall, a very nice little raspberry ale. B+

A solid first offering from a brewpub that I expect great things from in the near future. I talked to them about Brettophile, which apparently takes a bit longer to make, but they’re thinking maybe late this year for the first release. Until then, I’ll just have to keep visiting the taproom…