I’m not one of those capsaicin-addicted thrill-seekers hunting down obscure pepper-walez like the Merciless Pepper of Quetzalacatenango (“…grown deep in the jungle primeval by the inmates of a Guatemalan insane asylum.”) but I do enjoy spicy food and hot sauces. As per usual, you should remember that this is a beer blog and I am the worst, so you’ll need to take my ramblings with the appropriate boulder of salt. Or not. I’m not your mother.

Anyway, these are at least beer-adjacent hot sauces, so there is that. Choosing a favorite hot sauce is probably about as difficult as choosing a favorite beer (i.e. impossible), as different offerings fill different needs. I always have at least 3 or 4 different hot sauces on hand, sometimes more. Frank’s Red Hot is, of course, a constant and utterly necessary for wings (I generally don’t mind sampling another flavor of wing, but I’m invariably let down by the experience and regret not ordering the regular ol’ buffalo wing), but it’s nice to have some differing flavor profiles or textures around too. Before we get to the hot sauce, I wanted to give a shout out to Serious Eats’ recent Top 30 Hot Sauce list, which is a pretty fantastic resource that lead me to our first selection… 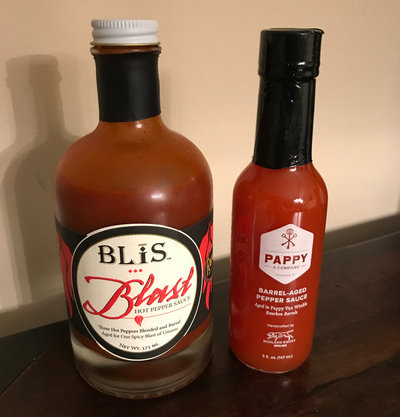 BliS Blast is up first. BLiS (an acronym for Because Life is Short) is most famous for making a bourbon barrel aged maple syrup (that is nice, but not as great as the Pappy aged one I reviewed last week), but they make a whole line of barrel aged goodies, like this hot sauce, comprised of chipotle, arbol and cayenne chilies aged for up to a year in barrels that have previously been used to age bourbon, maple syrup, and Founders Kentucky Breakfast Stout (KBS). The order of the aging is unclear to me, and there are a couple of possibilities. If the various aging processes occurred in the order listed, I think the resulting beer would have actually been Canadian Breakfast Stout (regular KBS doesn’t have the maple syrup component, but CBS does). Or perhaps separate bourbon barrels, some having aged syrup and some having aged KBS are blended together in the end. Whatever the case, the result is pretty great.

Pours a dark, grainy, browninsh red color. Smells complex, sweet, but almost smokey, maybe coffee, lots of cayenne peppers, chipotle comes out as well, and yes, relatively sweet too. Taste follows the nose, sweet with a smokey, almost roasty character and a light spice heat. Mouthfeel is rich and sweet, light spice heat but it lingers for a bit. Overall, this is a fascinating hot sauce, hints of almost barbecue going on here, but it’s got a nice, light heat and smokey, roasty character that is really well done and complex. Relatively mild as hot sauces go, but the barrel character seems to actually come through and contribute more here than I’d expect.

Next up, Pappy & Company Barrel-Aged Pepper Sauce. This is a collaboration with Midland Ghost, a hot sauce made from first generation Ghost Peppers and aged in Pappy barrels of unspecified expression (my guess is the 10 and 12 year, as with the syrup). A little more straightforward, but still quite nice.

Pours a light, bright orange color, pepper chunks visible. Smells more evenly of pepper, apparently ghost pepper. Taste is more obviously hot sauce than the BLiS stuff, lots of peppers, vinegar, and moderate to high heat. Mouthfeel is lighter and thinner but spicer, hotter than BLis (though it’s not overly-so, nor is it something that will get the Scoville-addicts who’ve built up a resistance excited). Overall, this is hot, tasty, and interesting. I don’t get a ton of bourbon or anything to indicate its provenance, but it’s still pretty good… if a little disappointing since the maple syrup they make has such a great bourbon character.

Verdict? The BLiS is more interesting and unconventional and I think I like it better overall, but the Pappy & Co offering is still a good, if more conventional, hot sauce. That being said, the world of hot sauce is so large that it’s hard to justify the Pappy premium for something that isn’t as distinctive as you might think.