Australia is one of those places that’s supposed to have a great brewery scene and drinking culture (as one might expect from a former penal colony), but thanks to taxation, regulation, and trifling things like import duties, we don’t see a lot of their stuff in the U.S. Sure, you’ll see some overpriced bottles floating around here or there, but with the U.S. brewery count passing the 5000 mark, most beer dorks over here seem content with exploring their local environs rather than taking a flier on some obscure Aussie farmhouse ale like this. Well not at Kaedrin! We just had to know if the whirlpool swirling wort in a counter-clockwise fashion made a difference. Or something like that. 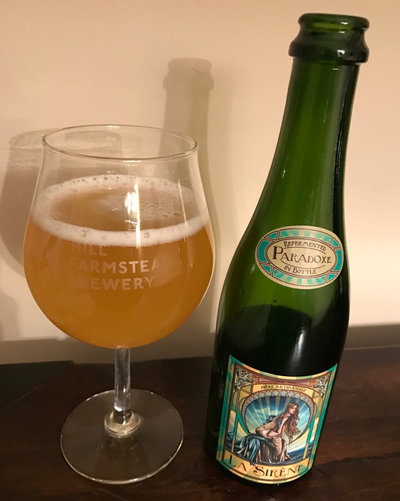 La Sirène Paradoxe – Pours a cloudy pale yellow color with a finger of white, bubbly head that sticks around for a bit. Smells very nice, tart, vinous fruit, a little funky earth, a hint of spice, maybe even some tropical citrus hops. Taste has that same tart, vinous fruit, less intense than the nose would imply but nice, a little bit of earth and spice in the middle, finishing on a tart note. Mouthfeel is light bodied and well carbonated, goes down easy. Overall, this is a solid offering, could use a little more body and intensity, but it’s quite nice! Is it worth traversing the seven seas to obtain? Probably not, but it’s worth a shot if you like this sort of thing and it’s conveniently available. B+

I would certainly give La Sirène another shot, but alas, I have no immediate plans to do so. One never knows, though, and I’d obviously like to try more beer from Down Undah (as this was apparently my first! (Not counting, Fosters, I guess.))