We covered de Garde, a pioneer in the next generation of American sour beer, on Monday. Today, let’s take a look at a contemporary located in California. While perhaps not as ambitious as de Garde’s all-spontaneous program, these hippies in Berkeley still managed to come up with a novel approach. They limit themselves to sour beers (still somewhat unusual, even in today’s landscape) and periodically initiate an extensive search of their barrel house to find the eponymous “Rare Barrel”, the finest sour they have aging at the moment. Naturally, that beer is released, but the barrel is then used to inoculate future batches of beer too. Not exactly natural selection, but evolutionary enough, I guess. And the “search party” isn’t exactly filled with scrubs. They’ve had folks like Vinnie Cilurzo of Russian River and Lauren Salazar of New Belgium (both early adopters in American Sour beer). I’ve managed to snag a few tastes of their stuff and I can attest: This approach works.

Shadows of Their Eyes is a dark sour aged in, yes, oak barrels. The name looks to be a reference to Harry Nilsson’s song Everybody’s Talkin’… I can’t see their faces. Only the shadows of their eyes: 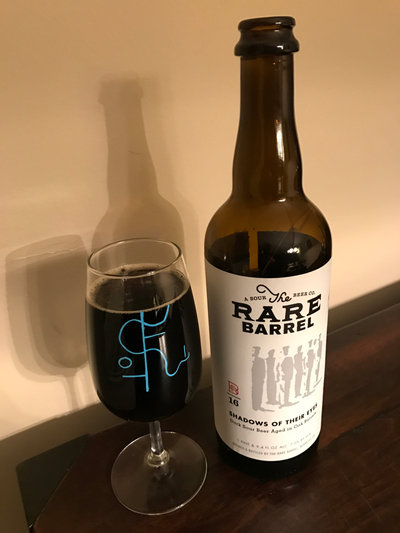 The Rare Barrel Shadows Of Their Eyes – Pours a clear, very dark brown color with ruby highlights, appears almost black, with a half finger of off white head that quickly fizzes out. Smells of dark malts, dark fruit, cherries, oak, and vanilla. Taste is sweet and sour, some dark malt presence, oak, dark fruits, cherries, and did I mention sourness? Mouthfeel is medium bodied, well carbonated, with a richness associated with barrel aging and moderate to high acidity. Overall, this is a pretty fantastic dark sour. A-

So we will be seeing more of the Rare Barrel soon enough. Oh yes. Stay tuned.