One of Oskar Blues’ claims to fame is their popularization of using cans to package their beer. So I guess their pioneering status makes it ok that they started packaging beer in bizarrely proportioned “Stovepipe” (aka “Royal Pint”, 19.2 ounces) cans. Not quite the innovation that I’ve speculated about in the past, but I’ll take it. Especially when the can contains a bourbon barrel-aged version of their 10.5% ABV imperial stout, Ten-Fidy. Even if the beer’s name now makes no sense – maybe this should be called “Twelve-Niner” or something (get it? It’s 12.9% ABV people, keep up). Aged “through four seasons”, it only survived about a week in my fridge: 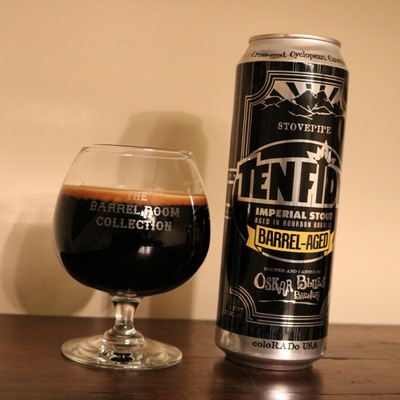 Blues Barrel-Aged Ten Fidy – Pours dark as night with a pretty finger of brown head. Smells fabulous, rich caramel, oak, and vanilla, boozy bourbon, a little roast and dark chocolate. Taste follows the nose, sweet caramel, oak and vanilla up front, some roast kicking in towards the middle, maybe some chocolate, finishing with a balancing bitter hop bite and some boozy bourbon. Mouthfeel is rich and full bodied, tightly carbonated, just a little boozy heat. Overall, yes, this is really great. A high A-

It’s been a while since I got to try a new Oskar Blues beer, so it’s nice to see they’ve still got the touch. There are some other variants of Ten-Fidy, but they seem to be brewery-only releases, so I’m not holding my breath. Then again, I’m pretty sure BBA Ten-Fidy wasn’t distributed far and wide until this year, so maybe I should. I can hold my breath for a year or so, right?