Defenestration is literally the act of throwing someone or something out of a window. Sounds cathartic, especially since the best known objects of such treatment are unwanted politicians. The label sez it perfectly, so I’ll just let it speak for itself:

Some of the most famous and notorious defenestrations occurred in Prague in the 15th and 17th centuries. These defenestrations were done in an effort to remove government officials by throwing them out a third story window. The result was either sudden death or serious bodily injury. Either way, mission accomplished!

In the spirit of this 2016 election year, we hope you enjoy our hoppy Belgian-inspired blonde ale named for the act of removing politicians by throwing them out the window – literally!

The picture on the label is also quite apropos, though the 2016 election probably deserves a more gruesome visual. Lots of people are struggling right now and while it might be fun for defenestration to make a comeback, that’s probably not the answer. Probably. In the meantime, maybe beer can provide some small measure of comfort: 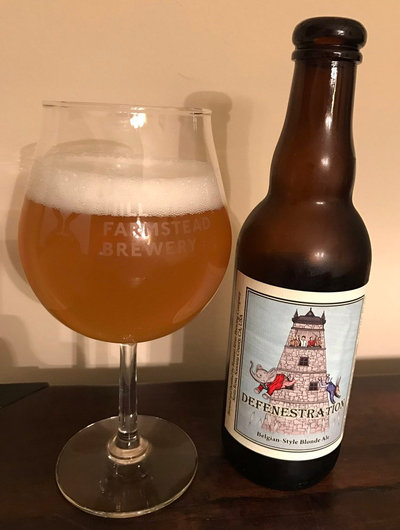 Russian River Defenestration – Pours a straw yellow color with a finger of fluffy white head and good retention. Smells quite nice, musty Belgian yeast, a little bit of spice, and a slight aroma of citrus hops. Taste mostly hits those Belgian yeast notes, spicy phenols, light on the fruity esters. Mouthfeel is light bodied, highly carbonated, crisp, and effervescent, quite dry too, goes down very easy. Overall, this is a very nice, pretty straightforward Belgian pale ale, with just a hint of hops for added fun. B+

Not Russian River’s top tier, but a rock solid Belgian ale. Many thanks to fellow Beer Nerd Gary for securing the bottle and slinging it my way!