When I was a kid, I collected coins. And not just those goofy books with slots for each year’s penny, I went all out, grading them (XF-45 bro), putting them in fancy individual casings, and so on. Yes, I was a nerd, I believe we’ve already established that, quit screaming “NERD!” at the top of your lungs. Anyway, Buffalo nickels (aka Indian Head nickels) were interesting because the ill-advised design lead to normal wear and tear basically erasing the year from the coin (since it was on a raised area of the engraving, it was the first to fade). Still, it was a nice design, as you might expect when Teddy Roosevelt’s administration started on a mission to “beautify” the nation’s coinage. All our coin designs these days are boring old presidents. Those older coins were great, with a million variations on lady liberty, Mercury wings, buffalo, Native Americans, shields, and so on. These days we’re stuck with a cavalcade of presidents. Nice, I guess, but it could use some updating, no?

Anywho! This is a pair of barrel aged beers from New Jersey’s Double Nickel brewing company, both Buffalo Nickel inspired. Or at least named after them. I mean, nickel is a toxic transition metal and thus not a great ingredient in beer. But I digress. Again. Anyway, a friend had brought both of these to a bottle share a while back, and I was pretty impressed, but then, it’s tricky to really evaluate beer at a share. Too many flavors, tiny pours, and so on. So during a recent sojourn into the Garden State, I saw these and jumped on them. I mean, I quickly purchased them. I didn’t literally jump on them. That would have hurt. As expected, slightly different perception when drinking by themselves, though I still really enjoyed them. One of the most interesting things about them is that they’re relatively low alcohol for bourbon barrel aged beers. 8-8.5% is reasonably high, but compared to the normal 13+% we see, these are pretty svelte. Let’s see how they hold up: 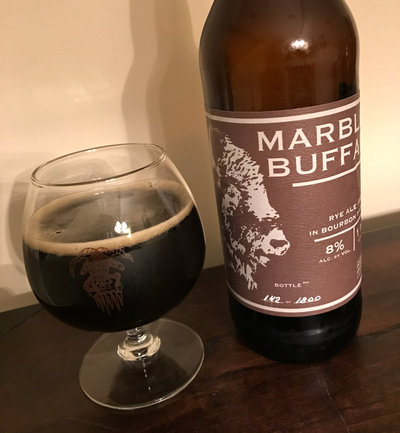 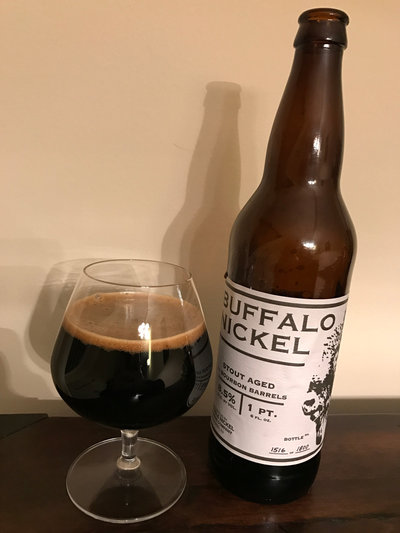 Double Nickel Buffalo Nickel – Pours a very dark brown, almost black color, with half a finger of light brown head. Smells of caramel and vanilla, with hints of bourbon and oak, and maybe some faint roast. Taste is rich caramel and vanilla, with some roast and maybe even a little hop character floating around in the middle, finishing on a bourbon and oak note. Mouthfeel is slightly less carbonated, rich, full bodied, but still pretty approachable. Overall, nowhere near as unique, but a solid little BBA imperial stout, all the more impressive because of the lowish ABV. Quite nice. B+

These beers made a pretty great first impression on me, and being located in Pennsauken, New Jersey, they might be closer than a lot of great PA breweries I visit on the regular, so you’ll probably see more from them here at some point…