To celebrate their underrated brewery’s anniversary, Union brewing makes a barleywine named after local legend Chessie, a sea monster said to live in the midst of the Chesapeake Bay. As with most local legends of this ilk, there are many sightings but no actual evidence of its existence. Funnily enough, speculation meant to explain the sightings sound even more far fetched than a legendary sea monster and include a “mutant eel” theory, large river otters, prehistoric Zeuglodons, and South American anacondas escaping from 18th- and 19th-century sailing ships.

Fortunately, there’s plenty of evidence for the beer’s existence: namely that I was able to purchase and drink a bottle. It’s a little over a year old and I get the impression it would be better fresh, but as it is now, it occupies that same strange territory in the DIPA/TIPA/Barleywine triangle. Regardless, Chessie’s come out to play and behold! Photographic evidence: 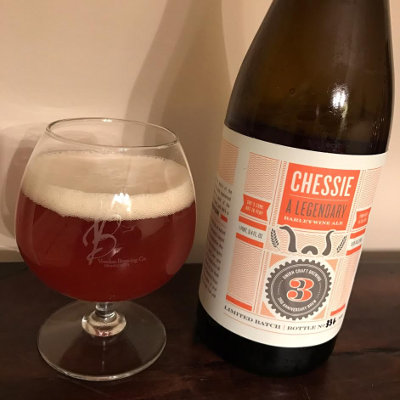 Union Chessie 3rd Anniversary Barleywine – Pours a dark amber brown color with a finger or two \ of fluffy off-white head that sticks around for quite a while. Smells of faded citrus and resinous pine hops with some crystal malts lurking in the background. Taste also hits the citrus and pine hops pretty hard, with a light crystal malt backbone and dry, bitter hop finish. Mouthfeel is highly carbonated, medium bodied, and surprisingly dry for the style. Not red wine dry, but still much more attenuated than your typical barleywine. Overall, this is an interesting beer, somewhere in that DIPA, TIPA, Barleywine triangle, tasty too. Would like to try fresh (or aged in a barrel). B

This was the third anniversary beer, but they also released the second anniversary Chessie that had been aged in Elijah Craig 12 barrels last year. Here’s to hoping I can snag the BA version later this year…