It’s been a while since I’ve checked in with the semi-local booze hounds up at Weyerbacher. They made a big splash with last year’s Sunday Morning Stout, which might be their all-around best beer that is regularly available (I’m still partial to Whiskey Barrel Aged myself; alas, that was a one-off), but then my now legendary indifference to coffee dulled my personal response. As usual, my instinct upon drinking a well made coffee stout is to wonder what it would be like without the coffee.

On paper, Weyerbacher’s 21st Anniversary ale seems to fit that bill perfectly. An 11.9% ABV imperial stout aged in bourbon barrels with cocoa nibs, cocoa powder, and vanilla beans. It sounds grand, but I’ve often found Weyerbacher’s barrel aged entries boozy and unbalanced (or completely lacking in barrel character, which makes for an odd dynamic for sure). One reason Sunday Morning Stout has caught on is that it actually coheres into a well balanced little treat. Will this one fare as well? Well, sorta, but I’ll tell you one thing: It really made for a nice palate cleanser after drinking gallons of VT IPAs over the past few weeks. Let’s get to it: 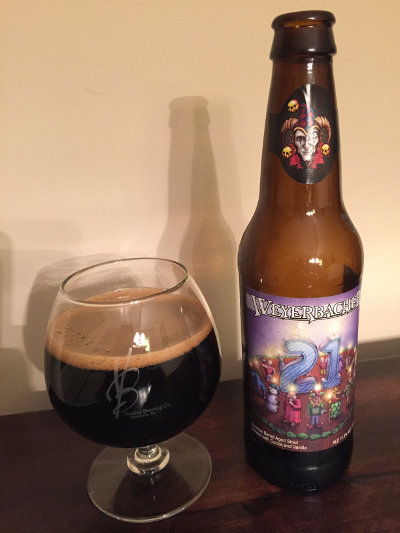 Weyerbacher 21st Anniversary Ale – Pours a very dark brown, almost black color with a finger of tan head. Smells of vanilla, a bit of roast, dark chocolate, and hefty amounts of bourbon and oak. Taste starts off with that hint of roast and dark chocolate, followed by a sweet wallop of vanilla, then lots of boozy bourbon. Mouthfeel is full bodied and well carbonated, pretty boozy, not particularly balanced, though it does get better as it warms – this is a beer to let sit out a bit, methinks. Overall, this is a good, tasty little beer, it lacks the integration and balance of the best in style, but if you’re a fan of vanilla and bourbon, you’ll like this sucker. (For the record, I like vanilla and bourbon quite a bit.) B+

Definitely a contender for best Weyerbacher Anniversary beer I’ve had, but then, they tend to be a little hit or miss. I haven’t done a good job keeping up with their Brewer’s Select series of one-off experimental beers and I see they’ve now renamed it Jester’s Choice. I shall have to keep an eye out for those beers. If one catches my eye, you’ll probably be hearing about it on here!