Baltimore’s Union Craft Brewing continues to be an underrated gem. They don’t put out a huge variety of beers, but their Duckpin Pale Ale and Double Duckpin are both fantastic go-to beers that aren’t too difficult to track down. The single Duckpin, in particular, is an underrated beer that deserves more attention. Or not, because I like being able to reliable grab some anytime I’m in the Maryland area.

This is one of their one-offs, a Double IPA made with Columbus, Mosaic, Citra, Amarillo and Simcoe hops and fermented with a farmhouse yeast strain to give it a little Belgian kick. Not my favorite mashup of styles, to be sure, but it’s always nice to change things up from time to time and hell, that farmhouse Rooster on the can has a crown on its head and thus deserves some semblance of respect. Or at least a review: 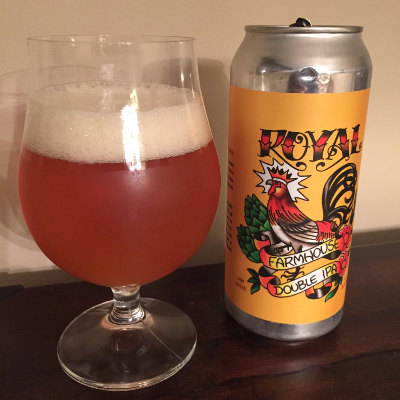 Union Royal Farmhouse Double IPA – Pours a mostly clear golden orange color with a finger of big bubbled white head that sticks around for a while and leaves lacing as I drink. Smells very nice, big citrus and resinous pine, hints of musty Belgian yeast. Taste hits those Belgian notes harder than the nose, some spicy phenols, but a nice fruity ester character that matches well with the citrus and pine hops, finishing with a nice bitter bite. Mouthfeel is medium bodied, well carbonated, relatively dry, with just a hint of boozy heat. Overall, I’ve never been a huge Belgian IPA guy, but this is good. B+

I firmly resolve, with the help of thy grace, to find more Union beer to review. I always grab something during my periodic pilgrimages to State Line Liquors in MD, but it’s hard to pass up the Duckpins, so I rarely branch out. I probably should!