Gimmicky beers with kooky ingredients can get old really fast. The problem is that it’s really difficult to incorporate some of this stuff into a beer without either A) overpowering the base beer, B) disappearing into the base beer, or C) making you feel like it was constructed in a chemical lab. But when done right, such schemes will make you wonder what sorcery the brewers hath engaged in to make the beer taste like that. Funky Buddha doesn’t always manage this feat, but they are amongst the best in the business when it comes to incorporating disparate and sometimes bizarre flavors into their beer. Last Snow, a coconut coffee porter, is astoundingly well balanced and delicious (only my general aversion to coffee holds it back, and honestly, even then I’ve grown to love this on subsequent tastings).

Now we come to Wide Awake It’s Morning, an imperialized version of their Maple Bacon Coffee Porter, a combo that seemingly requires genuine witchcraft to make work. Maple syrup is often used in beers, but its influence ranges from barely noticeable to a sorta transmuted version of maple. Coffee is coffee, of course, and can go sublimely with beer. But bacon? Usually when bacon is referred to in beer, it’s got some obscene dose of smoked malt that basically just ruins the rest of the beer. Somehow, though, Funky Buddha pulls all these flavors together, whips them into recognizable shape, and perfectly balances them in this beer. Clearly witchcraft, so let’s see what they got out that bubbling cauldron they call a brewery: 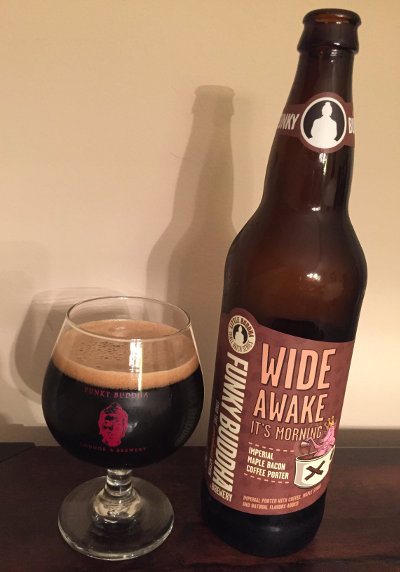 Funky Buddha Wide Awake It’s Morning – Pours a deep, dark brown, almost black color with a finger of light brown head, and yep, it’s a porter. Smells like, whoa, yep, coffee, maple syrup, and bacon, maybe a little of caramel and vanilla in the background. Very impressive nose, adjuncty, but not quite artificial feeling even though it feels like it almost obviously has to be artificial. Gah. Taste has more coffee than the nose, roasty malts, chocolate, but the maple syrup and even bacon are there too. I have no idea how they got that bacon to work in here. I mean, maybe it’s a bit smokey, but it genuinely has that rich, meaty feeling you get from bacon somehow. Mouthfeel is medium to full bodied, moderate to low but appropriate carbonation. Overall, this is intense and complex, and asoundingly enough, the proportions are right. A little gimmicky perhaps, but a delicious gimmick, to be sure. A-

Many thanks to Kaedrin beverage compatriot Steve for hooking be up with some Southern Florida goodies. You will be seeing more from Funky Buddha on here in the nearish future.