Once upon a beer trade, many orbital cycles ago, Jay of the quasi-defunct Beer Samizdat sent me a bottle of Eagle Rock Jubilee. Being a sorta hybrid old ale/winter warmer, I enjoyed it a lot more than I thought I would. So I kept my eyes open for Eagle Rock. Three years later, and lo, I hath finally secured another bottle of Eagle Rock wares. This is a red wine barrel aged dark mild ale (they use the genuinely sessionable Solidarity as the base) that has soured up nicely. Insert beer-themed film noir joke here: 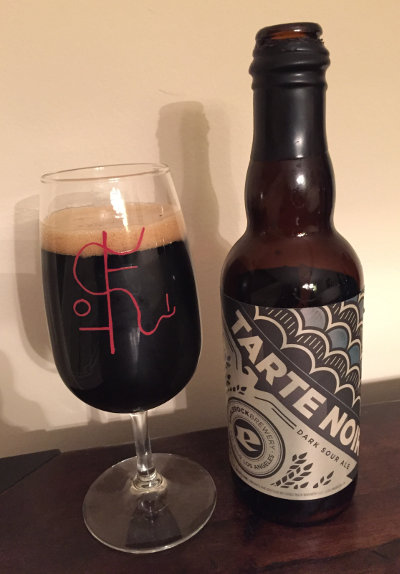 Eagle Rock Tarte Noir – Pours a very dark brown color with a finger of tan head. Smells of musty, dusty funk, sour, vinous fruit, a little oak and vanilla. Taste has that sour vinous fruit character, less of the musty, earthy funk, finishing with a nice puckering sourness. Mouthfeel is surprisingly light bodied and nimble, well carbonated, with medium acidity. Overall, this is really quite nice. On the higher end of B+

Nice, let’s check in on them in another three years to see where they’re at. Or, you know, we could try and do it before then. Only following the orbital cycles will tell.