Pop culture is awash with fan attempts to keep their favorite media alive. From Trekkies keeping their beloved three seasons in syndication for years and finally convincing Paramount to bring the crew back on the big screen to more modern (and sometimes failed) attempts to save Chuck or Firefly, fans tend to live up to the linguistic origin of that term: fanatics. Depending on your point of view, these campaigns can range from inspirational and noble to whiny and entitled (and everywhere inbetween). However you judge such advocacy, you can’t deny that it is sometimes effective. And sometimes it happens in the beer world.

Rodenbach Alexander is a cherry-dosed Flanders Red that went defunct somewhere around the turn of the century. The beer scene wasn’t quite as hot then, and was actually contracting due to a minor bubble burst of speculation before the craft movement fully got its legs under it. So Rodenbach made due with their Classic and Grand Cru beers, truly world-class stuff, until they couldn’t ignore the demand for Alexander to return. I’m sure the success of Caractère Rouge (a similar fruited Flanders Red) helped too. I don’t know of a pop-culture-like campaigns to bring it back, but when the few remaining bottles of Alexander start going for 4-digits on the black market, you’ve got to think that a brewery would notice that there’s a market to be tapped there… so 2016 sees the first batch of Alexander in 17 years. Actually, it’s just in time for the 30th anniversary of the first time they brewed this beer in 1986 in order to commemorate the 200th birthday of Alexander Rodenbach (obviously one of the founders of the brewery). All of which is good news indeed: 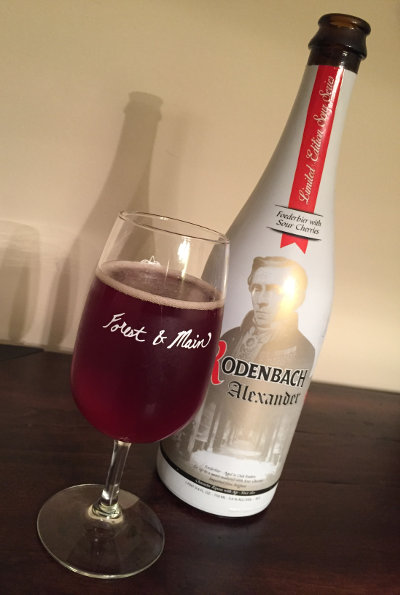 Rodenbach Alexander (2016) – Pours a striking, almost clear ruby red color with a finger of fizzy off white (maybe some pinkish hues). Smells of sour cherries, vinous fruit, with a little oak and vanilla pitching in. Taste hits that sour cherry and vinous fruit character pretty hard, but there’s just enough of the background acetic flanders red character anchoring it, moderate sourness, vinegar, a little oak and vanilla providing depth. Mouthfeel is medium bodied, moderate acidity, medium to high (but appropriate) carbonation. Overall, this is along the lines of Caractère Rouge, but not quite as fizzy fruity tooty. That… means something, right? Whatever, this is great right now, but I suspect it could age fabulously. A-

Rodenbach delivers, as always. I might have to track down another bottle of Caractère Rouge, you know, for reasearch, to see how it compares.