Venus Callipyge is an ancient Roman statue depicting a partially draped woman with her head looking back and down, as if to evaluate her bare buttocks. Little is known of its origins or the original artist. Indeed, it is thought to be a copy of an even older ancient Greek statue, also of unknown origins. Let’s just call the original sculptor Sir Mix-a-Lot, to recall a more modern appreciator of posteriors.

What does this have to do with beer? Well, Avery seems to think this 17.4% ABV monster is “well-rounded”, which is a bit of a stretch. Full bodied and bodacious? Certainly! This is along the lines of something like Uncle Jacob’s Stout, but with the ever-so-popular kitchen sink approach to ingredients. A big, bourbon barrel aged stout with coffee, cocoa, cocoa nibs, and vanilla beans added. I would make some sort of additional Baby Got Back reference, perhaps adapting it to beer, but I will not sully such a lyrical masterpiece and instead, will just get to it: 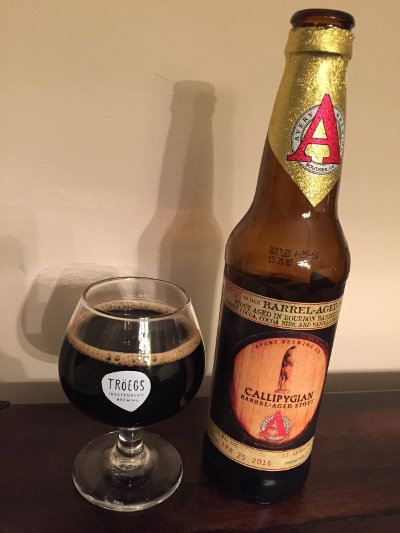 Avery Callipygian – Pours a deep black color with half a finger of short lived tan head. Smells of rich caramel, oak, bourbon, and vanilla, a little of that coffee is apparent and gets more prominent as it warms, but this is no coffee bomb (nowhere near something like Tweak). Taste hits similar notes, rich carmel, oak, vanilla, coffee, and lots of boozy bourbon. Again, the coffee is there, but far from dominant. Still, there’s enough to raise my coffee indifference meter a bit. Mouthfeel is full bodied, rich, and chewy, lots of boozy heat. To some people a 17% ABV beer will never be balanced, but this one seems a little more out of whack than similar efforts, though it gets more unified as it warms. Overall, a nice tweak (pun intended? Sure, why not.) on the bourbon barrel stout, kinda like a more complex, even less balanced version of Uncle Jacob’s… B or, what the hey, I’m feeling generous: B+

I’m liking that these barrel aged efforts are becoming more widely available around here, even if my favorites tend to be the simpler versions. Still, looking forward to trying more of these in the near future…