There are lots of breweries that use highfalutin terms to describe themselves. Craft has long since devolved into meaninglessness and debate that I could not care less about. Independent is the new hotness, but that’s distressingly prosaic and not really what I’m getting at. Artisanal? Bespoke? Hand made? Now that’s what I’m talking about. While usually belying a nugget of truth, I think most of use see these as the marketing codewords and hipster signaling that they really are.

Ale Apothecary describes themselves as “A Vintage Batch Oak Barrel Brewery Buried in the Mountain Wild of Oregon. Producing the finest hand made beer using our own innovative brewing process, which melds the ancient art of brewing with traditions of wine & champagne production.” Engage cynical hipster codeword scanners. 8%…. 19%… 42%…95%… Scan Complete. Results: Signaling present, more data needed. Alright, so yeah, maybe I’m feeling paranoid right now, but dropping $30 on a bottle of beer will do that to you. Then again, the process described on their website, in all its wonky glory, does seem to fit with their marketing fluff. Their beer appears to spend nearly all of its time in oak barrels (presumably only really excluding the boiling stages), from mashing in to fermentation to aging to dry hopping, it’s all done in barrels. Each batch appears to be from a single barrel as well, meaning really tiny 50ish gallon bottle runs. Each barrel appears to be lovingly named (rather than just using boring old numbers) and presumably reused frequently in order to build up their yeast strains and bacterial beasties. Truly small scale stuff, with a price tag to match.

Sahalie is their flagship ale. It spends over a year in a barrel, followed by a one month dry hopping period in another barrel (they appear to only use Cascade hops at their brewery, which is something I’ve never heard of before – single hop brewery?) This particular bottle began life in August 2014 and was aged for over 1 year in a barrel named “Reno”, after which it was dry hopped for a month in a barrel named “Bagby”. Finally it was bottled, using an oddly designed cork and twine contraption to seal the bottle and allow it to condition for a few weeks. The result? Well, my paranoid ramblings appear misplaced, this is phenomenal: 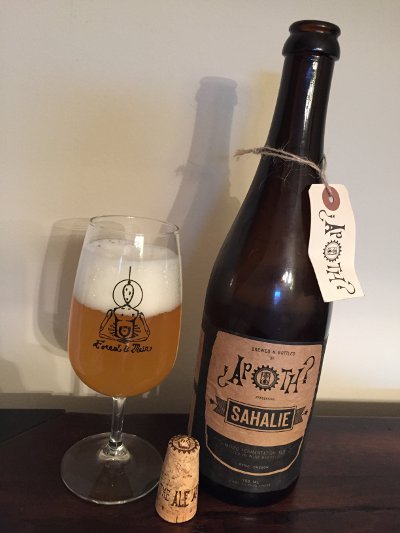 Ale Apothecary Sahalie – Pours a hazy pale yellow with a couple fingers of fluffy white head that sticks around for a bit and even leaves some lacing. Smells fabulous, lots of vinous fruit, oak, musty funk. Taste follows the nose, fruity and spicy Brett, musty funk, finishing off with that big vinous fruit kick and maybe a hint of booze. Mouthfeel is highly carbonated and effervescent up front, but leveling off a bit in the finish, which has a note of pleasant booze, even if it hides the alcohol pretty well. Still, it’s pretty intense, so it’s not quite a pounding beer if you know what I mean. Overall, this is fantastic, complex, delicious.. A

Well that was nice. Who knows if I’ll ever get to try more from Ale Apothecary, but I’d totally be willing to shell out the scheckels for more of this (or any of the other varieties they produce).