Forest & Main’s Marius series of oak-aged, fruited saisons is pretty clearly their most anticipated release. While normally laid back affairs, Marius releases tend to sell out right away. As a result, I’ve missed out on the first few releases. I finally got my act together for the most recent release, which was three different variants: Cherries, Peaches, and Plums. I split the Cherry with some friends and loved it (but never wrote down any notes – I’m the worst) so I was quite excited to crack open the other two whilst embarking on the great 2015 movie catchup. The Big Short kinda came out of nowhere and has a pleasingly odd pedigree, and I loved it. It’s actually kinda the best explanation for the 2008 economic crisis I’ve seen (save the source material, of course) and the humor is mildly effective at toning down just how insane the whole situation was (and kinda still is). Kung Fu Killer is, erm, less successful, though it has some nice martial arts action sequences that’d make it worthwhile for fans of that sort of thing. Fortunately, this beer made up for any of that film’s shortcomings: 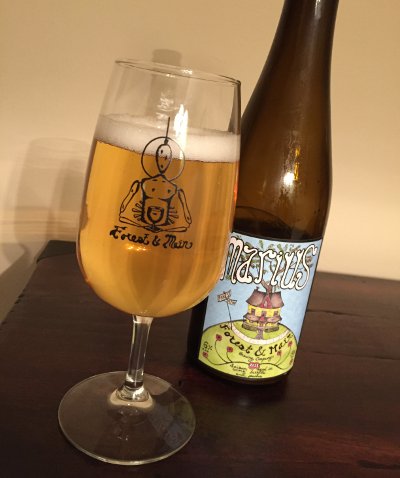 Forest & Main Marius (Peach) – Pours a striking, clear yellow color with a finger of fluffy head that has great retention that leaves a little lacing (for what it’s worth, the second pour was more cloudy). Smells nice, some musty funk, but lots of fruit too, those peaches coming through well. Taste has a very nice earthy, musty funk to it with a fruity peach kicker, some tartness and oak pitching in towards the middle and lasting through the finish. Mouthfeel is well carbonated, crisp, and dry, lightly acidic, almost quaffable. Overall, this is a winner, rivaling the Cherry though probably not exceeding it. A- 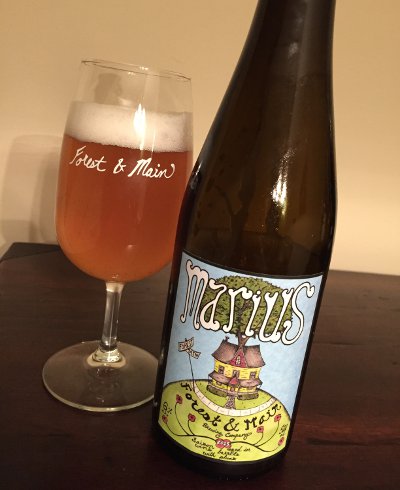 Forest & Main Marius (Plum) – Pours a much more cloudy, darker yellow color with more head, at least two fingers, great retention, some lacing. Definitely has a distinctly different smell here, still some musty funk, but moreso than the Peach, and the plums certainly lend a different fruit character. Taste has more of a yeasty character to it, some of that earthy, musty funk, but also some more traditional estery feel along with the plum fruit, not as sour as the peach either, though there is a bit of tartness. Mouthfeel is highly carbonated, crisp, and very dry, less acidic, though there is still something there. Overall, this too, is a winner, though not quite up to the level of Cherry or Peach. B+

More great efforts from Forest & Main. They’ve got an expansion underway, so I’m expecting to see great things from them in the nearish future.