One of the more interesting crossovers between beer and bourbon is New Holland’s Beer Barrel Bourbon. First, they get old bourbon barrels to age their imperial stout in, resulting in Dragon’s Milk (that accessible beginners BBA beer that is a reliable standby). Next, they went out and sourced some bourbon (presumably from MGP, because who else?) at 110-115 proof, then dumped that into the old Dragon’s Milk barrels (i.e. this is a third use barrel). The result is a beer barrel finished bourbon that lots of people seem to enjoy and that I thought I’d never find. However, during a recent jaunt to the Garden State, I spied a bottle of this very juice and immediately snatched it up, knowing in my heart that I would also snag a Dragon’s Milk to complete the double feature. So let’s get it on with some hot bourbon on beer action: 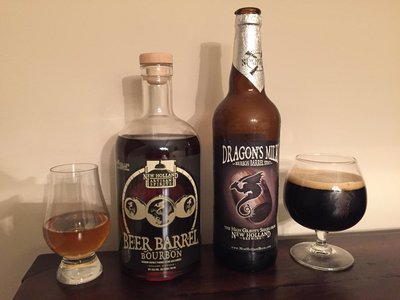 New Holland Dragon’s Milk – Pours a very dark brown, almost black color with a finger of light tan head. Smells sweet, lots of vanilla, a little caramel, hints of roast. Taste has a nice caramel and vanilla character to it, roast in the background. Mouthfeel is medium to full bodied, smooth and creamy, no real evidence of booze. Overall, it’s not quite the revelation it once was, but it’s a rock solid BBA stout and you have to admire the price point and availability. B+

New Holland Beer Barrel Bourbon – Pours a light golden color. Smells kinda new makish, but with a nice kick, vanilla and caramel and toffee. The vanilla seems most prominent. Taste again has some new make rawness to it, a little more prominent in the taste than the nose, but there is some hints of vanilla in the background. Mouthfeel is light and smooth, hardly even boozy (ah, it’s 80 proof, that explains it). Overall, its a little disappointing, but it’s also interesting enough that I tried it. Was it worth the flier on the whole bottle? I’d have to drink more to find out for sure. Who knows, maybe it will grow on me. For now: B-

Beer Nerd Musings: The beer barrel almost certainly lent some of those vanilla, caramel, and toffee notes to the bourbon, but my guess is that cutting it down to 80 proof did this a disservice. I’m not looking for barrel proof here, but maybe give us a little more heft, let those beery notes shine, you know? I’m betting this would be fine cocktail material though, and I should really try that. There are apparently some other beer barrel finished whiskeys out there. Sku has tried Abraham Bowman Gingerbread Beer Finished Bourbon (which used barrels from Hardywood’s BBA Gingerbread Stout) and found it interesting, but perhaps not whole bottle interesting. Berkshire Mountain Distillers has a whole series of beer cask finished bourbons, using barrels from the likes of Troegs, Sam Adams, and Terrapin. I’m sure there are others, but the all appear to be small micro-distilleries, and thus it feels like they’d all be a little young. I’d gladly try more though!

This was fun, and something I will clearly need to try again soon. It appears that New Holland has even started putting out some variants of Dragon’s Milk, though none of them sound particularly exciting to me. If I see one, I might take a flier on it, because I’m the worst.