In my effort to engage with more beers from the lager family, Jack’s Abby is certainly a worthy ally. Last time I reviewed a beer by them and noted that I was becoming more acclimated to lagers, they responded on Twitter “One of us! One of us!” This reference to a classic movie only served to endear them to me further. As such I was looking forward to trying more from them, like this Doppelbock that I picked up in the summer, but only managed to open once the weather became a little more conducive to such a burly beer. In truth, it’s not really my favorite style, but as always, I’m interested in branching out. Doppelbocks seem like the sort of style I could get into eventually, even if they’re not really there yet. As such, while I enjoyed this, I’m also a bit restrained on it because of my preconceived notions. I’ll get over this sort of thing someday, I swears. In the meantime, let’s take a closer look: 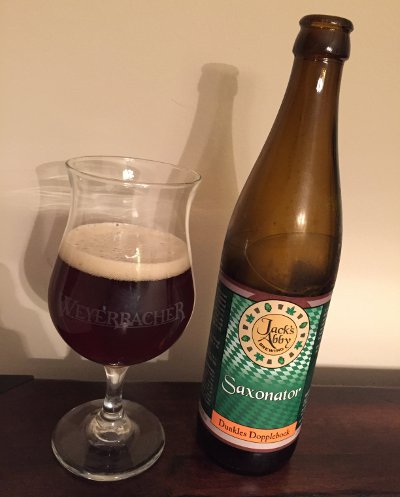 Jack’s Abby Saxonator Dunkles Doppelbock – Pours a reddish hued brown color with a finger of off white head that sticks around for a bit. Smell has some raisiny dark fruit, but also an herbal, earthy, bready aroma that I associate with lagers. The dark fruit comes out a little more in the taste, sweet crystal malts, and that herbal, bready lager character pitch in as well, finishing sweet. Mouthfeel is medium to full bodied, low, tight carbonation (appropriate for the style), hints of booze, and maybe a little stickiness. Overall, it’s a solid little dopplebock. Admittedly, this is not my style, but this feels like a well crafted version. B

Not my favorite Jack’s Abby beer, but they will always be my lager gateway, especially once they start distributing more out here next year (at least, I hope so, fingers crossed!)